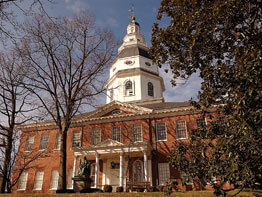 Mary Ellen Russell is in for a baptism by fire in her inaugural year as executive director of the Maryland Catholic Conference.

With state lawmakers facing a looming $2 billion budget deficit, the Catholic lobbyist and her staff expect financial issues to dominate much of the agenda.

The 426th legislative session began Jan. 14 when 47 senators and 141 delegates convened in the state capital for the 90-day session.

The Annapolis-based MCC, legislative lobbying arm of the state’s Catholic bishops, is gearing up to protect the poor from impending budget cuts, while also defending a program that provides modest textbook and technology support to nonpublic school students.

The MCC is bracing against anticipated legislation they say would cripple the church’s ministries by expanding the statute of limitations on child abuse civil suits. The lobbyists also expect to face off against legislation discrediting pregnancy resource centers that help thousands of Maryland women.

Beyond protecting existing programs and resources, the MCC hopes to win a long-sought ban on capital punishment. Also high on the MCC’s agenda is eliminating funding for embryonic stem-cell research and establishing a business tax credit to help public and nonpublic school students.

Bringing the needs of the poor and vulnerable to the attention of lawmakers is “first and foremost” on the MCC’s list of priorities this legislative session, Ms. Russell said.

Possible budget cuts are coming at a time when charitable outreach programs run by Catholic Charities and others are facing increasing demands.

“It’s difficult to continue being a safety net for the state when we’re balancing budget cuts with increased demand,” said Ms. Russell, who served many years as the Catholic Conference’s deputy director of education and family life before succeeding Richard J. Dowling as executive director late last year.

Julie Varner, MCC associate director for social concerns, said she will urge legislators to hire enough personnel to handle the many requests for government assistance. She will also advocate for an increase in funding of the Electric Universal Service Program while working to prevent cuts in the newly expanded Medicaid program.

“We’re going to have a more coordinated focus on the budget, working with other poverty advocates,” Ms. Varner said.

Ms. Russell is concerned about expected legislation that would open a two-year window for civil lawsuits against the three Catholic dioceses serving Maryland for claims stretching beyond the current seven-year limitation. Baltimore County Democrat Delores Kelley is expected to introduce the legislation, which would also allow claims without a financial cap until age 50.

Similar legislation elsewhere has had a devastating impact on local churches, Ms. Russell said, leading some dioceses into bankruptcy. She called it “unconscionable” for lawmakers to consider a bill that would seriously jeopardize the church’s ability to help people at the time when assistance is most needed.

“It’s clearly being promoted by an organized group of trial lawyers around the country who are simply seeking lucrative settlements,” she said. “We’re concerned this legislation would discourage the early reporting of child abuse.”

Ms. Russell noted that Maryland has no statute of limitation on the criminal prosecution of child abusers.

Ellen Robertson, MCC associate director for education and family life, said it will be important to safeguard $4.6 million in state funding for the Nonpublic School Textbook/Technology Loan Program.

Nonpublic schools annually save the state about $1.5 billion in per-pupil expenditures, she said, and the state’s Catholic schools save state taxpayers more than $665 million.

The conference is asking Gov. Martin J. O’Malley to maintain the same level of funding in his budget, and for lawmakers to leave it alone.

“Our Catholic schools are facing economic challenges and declining enrollment,” Ms. Robertson said. “It will be very important for the General Assembly to fully recognize the savings our schools provide the state.”

Ms. Robertson noted that the state could not afford to absorb nonpublic school students in the public schools system.

As in previous sessions, the MCC is looking to establish BOAST (Building Opportunities for All Students and Teachers in Maryland), a tax credit for business donations to organizations that support public and private school students and teachers. Given the budget woes, the MCC is seeking to establish the program without funding so that its administration will be in place when it could be funded in the future.

“Without the attached funding, there’s a better opportunity to enact the legislation,” Ms. Robertson said.

With the legislative session opening a month after the Maryland Commission on Capital Punishment issued a report recommending the abolition of the death penalty, MCC leaders are hopeful lawmakers will take the recommendation seriously.

While the conference believes it has the votes on the floors of the House of Delegates and the Senate to ban the death penalty, the measure faces a tough test in the Senate Judicial Proceedings Committee, where it has fallen one vote short in previous sessions.

“We hope Catholics in their districts will weigh in on this issue,” Ms. Russell said.

On the day before the General Assembly reconvened, Auxiliary Bishop Denis J. Madden signed a letter to state lawmakers calling for repeal of the death penalty. He was joined by dozens of clergy who have formed the Interfaith Coalition to End the Death Penalty.

Nancy Paltell, MCC associate director for respect for life, is watching for expected legislation that would discredit the work of pregnancy resource centers around the state. The legislation would force pregnancy centers to say they are not required to provide medically factual information.

“Abortion advocates like Planned Parenthood and NARAL want to shut down their competition,” said Ms. Paltell. “It would have a chilling effect on the good work that is done by these centers.”

“It’s not the time to spend money on unethical research,” Ms. Paltell said.

During the legislative session, MCC leaders said they will stand against any attempts to legalize same-sex marriage. They will also watch for bills that would infringe on the conscience rights of Catholic doctors.