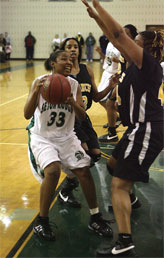 What a ride 2007-2008 was for head coach Jackie Boswell and The Seton Keough High School, Baltimore, basketball team. Boswell knew early on that her team, made up of a handful of talented seniors and an eager group of underclassmen, were going to make a run for the title.

The Gators did more than that by pacing the IAAM A Conference all season long. The Gators went undefeated in regular-season action, posting a 16-0 record, 29-5 overall.

Though truly a disappointing conclusion to a marvelous season, the Gators picked themselves back up and competed hard in the 14th-annual Bishop Walsh, Cumberland, Invitational Tournament two weeks later to place third in a field of eight top-ranked ball clubs.

“I think we were exactly where we were supposed to be at the end of the season,” said Coach Boswell, who gave a tremendous amount of credit to the Panthers.

Boswell said that for any team, 34 games was a lot of games to play, and that her Gators were prepared and upbeat the entire season.

Boswell will lose five seniors next year and will return two starters and a strong class of promising sophomores.

B.J. Williams, the Gators’ senior point guard and co-captain, is headed to Temple University in the fall to play for Dawn Staley, a former Division I player, WNBA player and seasoned college coach. “B.J. is excited about going and is ready for the challenge,” said Boswell.