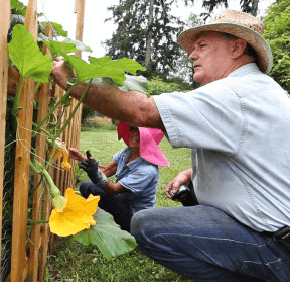 By Elizabeth Lowe
elowe@CatholicReview.org
Twitter: @ReviewLowe
TIMONIUM – Corazon “Cora” Vergara-Soares and her husband, Roy Soares, light up when they unlatch the gate and enter Stella Maris’ new healing garden.
“It’s a place of meditation,” said Vergara-Soares, 72, a retired Stella Maris internal medicine physician. “I sing to the birds, I talk to the plants.”
In late March, the Soares helped till the soil for a 30-by-20 foot garden – which abuts a wooded area and Stella Maris’ counseling center – and planted at least a dozen vegetable and herb plants the following month.
The now-flourishing organic garden includes tomatoes, herbs, zucchini, eggplant, kale, lettuce, peppers and watermelon.
The garden is therapeutic for the couple, whose only child, Kris, died in 2010. Their niece, who was a Stella Maris hospice patient, died a few months after their son. It can also benefit the Stella Maris community – patients, employees and counseling center clients.
“As a physician, I’m seeing it as a parallelism between tending a garden and taking care of patients,” Vergara-Soares said. “The growth of the garden is the same as the growth of a person.”
Kris, a chef, “would have loved this,” said Soares, 66.
In addition to tending the garden the Soares, parishioners of Immaculate Heart of Mary in Baynesville who typically attend Mass at Stella Maris, also fund the project. They have received some donations.
“It’s a labor of love,” Vergara-Soares said. “We don’t count the time or cost.”
“Cora and Roy are dear, sweet, humble Christian people who truly have a heart for reaching out and serving others,” said Doreen Horan, director and clinical counselor at The Counseling Center at Stella Maris. “It’s purposeful to them and it’s purposeful to us. It brings a nice awareness to the counseling center and that Stella Maris is reaching out.”
The idea for the healing garden and a neighboring butterfly garden, also planted this spring, came about several months ago, Horan said.
For now, Horan and the Soares tend the garden. Eventually, volunteers – counseling center clients, for example – will aid the trio, using the garden as a metaphor for their emotional healing, Horan said.
“It has become a beautiful garden for everyone to enjoy,” Horan said. “It’s a nice contrast from aging and illness and death to be able to walk outside and see the colorful flowers and vegetables.”
“We see it as a chance to offer other people a chance to be a part of it, or watch,” Vergara-Soares said. “We feel good about it. We’re happy people are enjoying it and benefitting from it.”
The few vegetables the garden has yielded so far are for sale. Proceeds benefit Camp Me Too, Stella Maris’ overnight bereavement camp for children ages 8 to 15.
Also see:
Loyola University Maryland student develops hospice research project
PrevNext