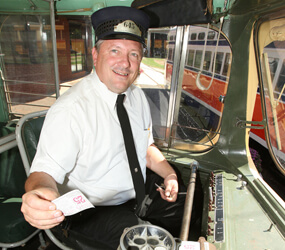 The No. 19 ran along Harford Road, stopping in front of St. Dominic Parish. That line is also the origin of the small shelter just north of St. Francis of Assisi Church.

The bus turnaround on Belair Road, a few blocks south of St. Michael the Archangel?

Another legacy of streetcars in Baltimore.

“And that’s just on the northeast side of town,” proclaims Father Kevin A. Mueller.

While his vocation is the priesthood – he’s the pastor of Church of the Holy Apostles in Gambrills – Father Mueller’s avocation is Baltimore’s past.

In 1997, he published “The Best Way To Go, The History of the Baltimore Transit Company,” which chronicled the local workings of 20th century mass transit.

Some of that history can be found at the Baltimore Streetcar Museum on Falls Road (http://baltimorestreetcar.org/), where Father Mueller and other docents have restored abandoned streetcars and tracks, evoking an era when the city’s population numbered 1 million and the majority utilitzed mass transit.

“It took you just three minutes to go from West Baltimore to Sparrows Point,” goes Father Mueller’s schtick, after the streetcar rides he conducts.

He salvaged a 1947 Baltimore bus that was later used in “My One and Only,” the Renee Zelwegger period film currently in theaters. The driver can’t be made out, but that’s Father Mueller behind the wheel.

He is also the author of “Bay Shore Park, Fun on the Chesapeake,” a history of a Sparrows Point amusement that operated from 1906 to 1947.

The books grew out of research he did while earning a degree in American Studies at Towson University, but his passion for Baltimore’s past begins with his ancestors.

His father’s family owned a popular hardware store in Essex. His paternal grandmother ran the original Thompson’s Sea Girt House, a landmark restaurant in Canton, and planted a seed.

“I remember my grandmother taking us on a streetcar on York Road when I was 4, right before they went out of service,” said Father Mueller, 49, who went to Loyola Blakefield High School and was a parishioner of St. Pius X and the Cathedral of Mary Our Queen.

“I always liked things of the past,” he continued. “I got my first traffic signal when I was 7. Now I have a whole barn full, in Carroll County.”

In addition to “My One and Only,” his film credits include antique cars that were used in the 2004 HBO film “Something the Lord Made.” It depicted pioneering 1940s work at Johns Hopkins Hospital by a white doctor and his black assistant, at a time when the races did not mingle – except on streetcars.

“Streetcars in Baltimore were not segregated,” he says, “there was no ‘You ride in the back of the bus.’ One of the reasons, is that you entered in the back and exited from the front.”

His parish office is adorned with a fare box from a New York bus and an antique cash register. Father Mueller doesn’t just collect, he builds, including train gardens and a 20-foot-long replica of Baltimore’s Inner Harbor, circa World War II.

“He was with me for his first assignment,” said Monsignor Paul G. Cook, pastor of St. Joseph in Cockeysville, “and what’s important is that he took his hobbies and used them effectively in his priestly ministry. Young people were amazed that a priest would be interested in the things he was interested in.”

Father Mueller’s current parish shares space with School of the Incarnation. The only downside to its surging enrollment is that there’s little space for him to set up a Christmas train garden for the students.

Whether it’s his faith or a fascination with mass transit of yore, when families were more apt to take a streetcar than a station wagon to Sunday Mass, Father Mueller exudes energy.

“I was just looking at old photos of the intersection of Baltimore and Monroe streets, 4-story houses, brick streets,” he says. “I can see the streetcars going up and down the street. It had to be too fabulous.”