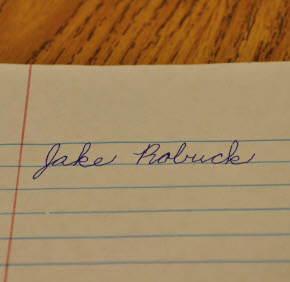 A fourth-grade student at School of the Incarnation in Gambrills won a national handwriting award, Principal Lisa Shipley announced April 26 at its morning assembly and prayer. Jake Robuck, 9, was among 16 students in grades one to eight who were named national winners by publisher Zaner-Bloser.

It’s important for students to remember that neat handwriting matters, Shipley said to the student assembly.

Jake Robuck, who is left handed, is a meticulous student who works hard to perfect his cursive, said his mother, Ericka. She and her husband Scott attribute Jake’s success to his teachers, and not their own penmanship, although Scott’s writing is neater than hers, Ericka said.

“Ever since he was very young, he’s always had beautiful handwriting, which is astounding to me,” Ericka Robuck said of Jake. “When he’s writing, he stops, he erases, he corrects until it looks absolutely perfect.”

“I just practice a lot,” said Jake, who began learning how to write cursive letters in second grade. Because of his neat handwriting, he recently penned a letter to Archbishop William E. Lori on behalf of his class.

All of Incarnation’s students in grades one to eight participated in the contest. Third- and fourth-grade students were asked to write their name and answer the question “How does your handwriting make you a better reader and writer, and why is this important?” They also copied “The quick brown fox jumps over the lazy dog,” which contains every letter of the alphabet. Incarnation administrators submitted the school’s best entries to Zaner-Bloser.

The publisher, a subsidiary of Highlights for Children which produces reading, writing, spelling, vocabulary and handwriting programs, judged entries on the letters’ size, shape, slant and spacing. More than 325,000 students participated in the annual contest, which is in its 21st year.

The uppercase “G” is Robuck’s favorite letter to write in cursive, and he finds the lowercase “x” the most challenging, he said.

His teacher, Betsy Werthmann, is a “stickler for handwriting,” she said, and described Robuck’s penmanship as having beautiful slant, size and uniformity of spaces.

“It’s a work of art,” she said. “Jake is not someone who rushes through his work.”

Robuck received a medal when Zaner-Bloser named him a state winner earlier in April. As part of the national award, Zaner-Bloser gave Incarnation a gift certificate for new handwriting materials.