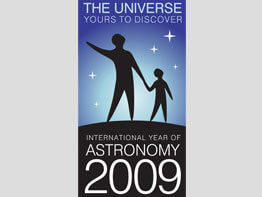 VATICAN CITY – As more than 130 countries celebrate the International Year of Astronomy, the Vatican also turned its gaze toward the heavens.

The year, which began Jan. 1, was established by the United Nations to coincide with the 400th anniversary of Galileo Galilei’s first use of the telescope to observe the cosmos.

The Vatican also is celebrating the star-studded jubilee year, as the Vatican Museums, the Vatican Observatory and other Vatican offices participate in several special initiatives.

In late December, Pope Benedict XVI rang in the year of astronomy early by sending his greetings to those participating in the yearlong celebration.

The pope repeatedly has praised Galileo, calling him a man of faith who “saw nature as a book written by God.”

The pope also has said the discoveries of science and astronomy can help people better appreciate the wonders of God’s creation.

As part of the astronomy year, Vatican astronomer Jesuit Brother Guy Consolmagno is one of more than 50 scientists from around the world who is contributing to a new Cosmic Diary blog The U.S. Jesuit and other contributors reveal in the blog – www.cosmicdiary.org – what it’s like to be an astronomer and explain details of their research.

The Vatican Observatory also will help organize a week on astrobiology at the Pontifical Academy of Sciences in November.

Astrobiology studies life in the universe and is hot on the hunt for extraterrestrial life and the so-called “Goldilocks planet.” Like the porridge this childhood storybook character gobbles up, it’s a theoretical planet that is not too hot and not too cold, but just the right distance from the sun to sustain life.

The observatory also is partnering with the Pontifical Commission for Vatican City State to publish a book on the history of astronomy and the Vatican.

In June a weeklong international symposium will cover the role of astronomy in the 21st century, science education and the dialogue that is needed between science and culture.

A special exhibit will open in October at the Vatican Museums displaying historical astronomical instruments. It will showcase antique instruments, spanning time from Galileo to models of the enormous telescopes used in astronomical research today.

Lastly, a large statue of Galileo is supposed to be erected somewhere on Vatican grounds. Paid for through private donations, the work of art was commissioned by the Pontifical Academy of Sciences to honor the 17th-century scientist. So far, there has been no word yet on when the statue will move into its new home.

Some church leaders expressed how the celebrations finally will put to rest the long suspicion that the church is hostile toward science.

Only 16 years have passed since Pope John Paul II formally acknowledged that the church erred when it condemned the Italian astronomer for maintaining that the earth revolved around the sun.

Even though it happened some 400 years ago, “the dramatic clash of some churchmen with Galileo has left wounds that are still open,” wrote Jesuit Father Jose Funes, director of the Vatican Observatory, in the Vatican newspaper L’Osservatore Romano.

He said the Galileo case may never be closed in a way that would make everyone happy.

“The church in some way recognized its mistakes” regarding Galileo but “perhaps it could have done better: One can always do better,” he wrote, adding that he hoped the year would help smooth strained relations between faith and science.

One Vatican official recently proposed that Galileo would make “the ideal patron saint for dialogue between science and faith.” Archbishop Gianfranco Ravasi, president of the Pontifical Council for Culture, told Vatican Radio that Galileo, as a man of science and faith, showed the two were compatible as long as each operated within its specific field.

The good that came from the “dark shadow” of Galileo’s condemnation was discovering theology should never, as it had during Galileo’s time, use science to prove religious objectives especially in ways that hinder scientific study, he said.

However, he added, science must not completely divorce itself from moral traditions and laws which can help ensure that scientific developments remain ethical and at the true service of humanity.