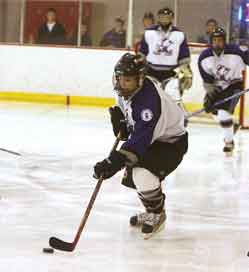 It was an up and down season for the Mount St. Joseph, Irvington, ice hockey team this year.

According to longtime head coach Erv Terwilliger, who is in his 17th season with the program, “We played well through the first half of the season. We beat DeMatha early on, which was great but I think we underestimated the chemistry of our team.”

The Gaels finished 6-0-3 in MIAA league play and posted 13-3-4 overall. In league play, the Gaels handily defeated their competition, yet there were games when they had to rev up the engines to come up with that last minute win or a tie.

As the longtime reigning champs of the MIAA league hit the ice in the MIAA finals game against an ever-improving Calvert Hall College team, the Gaels were outplayed from end to end, losing top honors to the Cardinals who hadn’t won an ice hockey championship since the mid- 1950’s.

For the Gaels, looking for their 10th consecutive title, the 4-3 loss was a tough pill to swallow, but the team pushed on in preparation for their season-ending tournament in the newly formed 11-team Mid-Atlantic Private School league (MAPHL).

The Gaels got their revenge on the Ice Cards in that quarter-final match-up, defeating the Towson School 6-5, in a come-from-behind win and another close match-up. “Calvert Hall is reaping the rewards of doing things right,” said Terwilliger.

Into the semi-finals the Gaels went, only to face another tough competitor, Gonzaga High School, Washington, D.C.

In regular season, the Gaels skated to a 2-2 tie against the Purple Eagles but in semi-final action, the Gaels were on fire, storming past their competition 5-2. The Gaels were led by senior Jake Natoli whose hat trick sealed the win while Gaels senior goalie, J. Paul McDonald, snared 28 saves on the night.

The Gaels were tired but ready to face a dominant team from DeMatha High School.

In regular season, the teams split, and both were geared up to take top honors in the inaugural year of the MAPHL. But the Gaels left it all on the ice in their win over Gonzaga and ran out of gas to yield to the Stags in 6-1 championship title loss.

Though the Gaels worked hard, led by Natoli, Mark Cisar and Andy McCrumb, it wasn’t enough, and the Gaels took runner-up again.

With 60 players in the Mount St. Joe ice hockey program, and a junior varsity program that’s second to none, Terwilliger said, “We’ll be ready next year. I’ve already got a plan!”