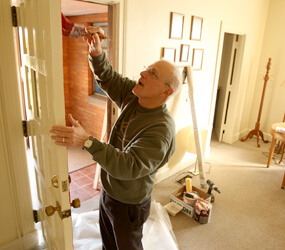 Pregnant women in Baltimore who need support in bringing their babies to term will find help next year when the Gabriel Network opens a new maternity home in West Baltimore.

To be located in the former convent of St. Benedict, the home will accommodate up to eight women and a “house mother” who will serve as a mentor throughout their pregnancies and beyond. The women will partake in parenting classes, learn about maternal health and receive spiritual and material support at the home.

Anthony DiIulio, executive director of the Gabriel Network, said the new home will be his organization’s fifth and the first in Baltimore. It was made possible when Sparrow House, an independent maternity home that operated in Bel Air for 24 years, joined the Gabriel Network this year and agreed to relocate its operations to the St. Benedict building.

“The program is designed to be a place of discernment during pregnancy,” said DiIulio, noting that adult women can stay in the home for up to six months after childbirth. “We will help them really discern if parenting or adoption is the right path for them and their baby.”

Archbishop Edwin F. O’Brien, who will bless the home Nov. 15, called the effort a much-needed and “extraordinary” initiative for Baltimore.

“There’s a real sense today that the large amounts of abortions in this city of ours is something that is scandalous and obscene,” Archbishop O’Brien said, “We have to address it and not blame individual women who are involved, but blame our culture for not supporting these women and encouraging them to bring their babies to term.”

Archbishop O’Brien said there is an assumption in many parts of the culture that if a single woman is pregnant, “the obvious answer is abortion.”

“There are other life-giving options,” he said.

DiIulio noted that there is a critical need for more maternity homes in the city. He hopes the West Baltimore center will be the starting point for a wider pro-life presence in the city.

A team of volunteers is remodeling the 6,000-square-foot former convent in Baltimore. It will cost $70,000 to renovate the two-story building. Annual expenses will be about $150,000, DiIulio said.

Father Ed Meeks, an Anglican priest and pastor of Christ the King Anglican Church in Towson, was one of the founders of the original Sparrow House. He will continue serving on a special advisory board dedicated to the maternity home’s ongoing operation in West Baltimore.

“Both the Gabriel Network and the Sparrow House board had been talking independently of each other about the need to have a greater impact on the inner-city where our client base is located,” Father Meeks said. “We discovered that we shared a common vision. It seemed to be God orchestrating our coming together.”

Father Meeks noted that the Gabriel Network is an interdenominational outreach that draws support from many different groups. Archbishop O’Brien said he hopes even more Christians will step forward to embrace the Gabriel Network and the pro-life cause. He called it a “scandal” that some Protestant denominations “remain neutral or are supporters of another position” on abortion.

“The more we can encourage pro-life Protestants – and there are a lot of them – to join us, I think we’ll have real momentum moving forward,” he said.

The new maternity home will open Jan. 25. The Gabriel Network also operates homes in Ellicott City, Gaithersburg and Silver Spring. A small home in Annapolis recently closed, but will be replaced soon by a larger one in Bowie.