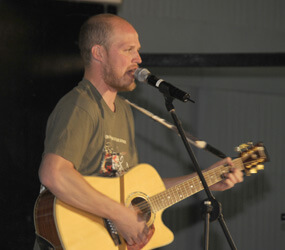 Some of the most useful career experience comedian Matt Baetz ever received came from his days as a student at St. Joseph Middle School.

“It was the best practice,” said the stand-up comedian, of delivering speeches to his peers at the Cockeysville school.

“My mom used to make me stand on the hearth to practice; she wanted to hear me across the room,” he said

The Baetzes were parishioners of St. Joseph and the Catholic Community of St. Francis Xavier, Hunt Valley.

Catholic school “teaches kids to be strong individuals,” Mr. Baetz said. “It’s great to be able to think for yourself.”

Thinking fast and funny onstage is what it’s all about for the Calvert Hall College High School, graduate, who most recently engaged in a month-long tour of entertaining U.S. troops at military bases in the Middle East. The 1996 graduate of the Towson school was 50 percent of the act “The Military Man and the Mama’s Boy Comedy Tour” presented by Armed Forces Entertainment.

Jumping at the chance for a repeat performance, Mr. Baetz awaits “Part II” of the overseas show scheduled for the fall.

“Everyone still needs to laugh,” said Mr. Baetz, humbled by the experience and his chance to give back to troops. “People look for an outlet.”

His average comic routine consists of 30-40 minutes of dialogue, followed by silly songs played with a guitar, such as “Tractor” (about a guy’s love for his tractor), and “Jeans Skier” (sung to the tune of “Dream Weaver” about people skiing in denim jeans).

“Funny” is in the eye of the beholder, said the comedian.

“It comes from looking at the world and questioning it” and is effective through delivery, word economy, attitude and expressions.

Before the tour, the 30-year-old comedian resigned from an almost five-year stint as comic booker and writer on “The Late Late Show with Craig Ferguson” in Los Angeles where he lives nearby the infamous Hollywood sign, “one of the tackier landmarks” he laughed.

Mr. Baetz has performed on Mr. Ferguson’s show twice and is scheduled to appear again April 15. He performs at colleges – as recently as March 19 at Loyola Marymount University in Los Angeles.

A June USO tour places him on the road again for 10 days, possibly with Mr. Ferguson and another comedian. His career goal is to appear on David Letterman before he retires.

He believes a comedian can do stand-up comedy and still have a message.

“Doesn’t everyone like to make people laugh?” he asked. “The best Masses I’ve ever been to are when the priests are engaging their listeners.”

There wasn’t much funny about a piece of Mr. Baetz’s blog on his Web site, written as his overseas tour was ending in early March:

“The experience of life is something you should try to digest firsthand. Turn off your TV. Turn off your radio. Open a book. Buy a guide. If you want to know about the situation in Afghanistan, I suggest reading about it, and if at all possible, visit the place. But the worst thing you can do is turn on the news or listen to politicians give you second reports on the state of the world. Go see it for yourself.”