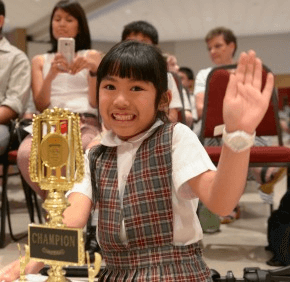 By Paul McMullen pmcmullen@CatholicReview.org Twitter: @ReviewMcMullen
FULLERTON – “Pull your chair in, place your feet on the floor.”

Nancy Vogtman has used words to that effect for 31 years, focusing the attention of her young students as they set about mastering handwriting.

Her expertise and that of one of her kindergartners at St. Joseph School in Fullerton were acknowledged May 24, when Zaner-Bloser, an Ohio-based publisher of educational programs, honored Caitlin Cahutay as a grand national champion in handwriting, and awarded Vogtman a trip to the International Literacy Association Conference in Boston.

The day before the two were feted at a school-wide awards assembly, Cahutay and her 22 classmates in Vogtman’s kindergarten class worked on printing the letter Y. Using a document camera and white board, Vogtman traced the formation of the letter as her students put pen to paper at their desks.

Why emphasize a form of communication that some in the tech world would argue is obsolete?

Vogtman and her principal, Phyliss Karko, counter that that would be putting the educational cart before the horse.

“Catholic schools have always stressed handwriting,” Vogtman said. “Especially with the little ones, it gives them a connection between learning the sound and pronunciation of the letter. It’s crucial, in the process of learning to form words, and then learning how to read what we have created.”

St. Joseph School students begin learning cursive in the second grade. One of its third-graders, Arianna Banas, was honored as a state champion by Zaner-Bloser.

“Like all disciplines, handwriting forms habits of the mind,” Karko said. “When we teach fine-motor skills that require hand-eye coordination, which develops a part of the brain that needs to be stimulated, it disciplines the child to be conscientious and proud of the appearance of the work they produce.”

To that end, there is nothing wrong with rote learning.

“When you repeat something a certain way, in the way that we insist on good handwriting, there is a pride in the work,” Karko said. “Children have to do certain things a certain way. Children develop their own signature, but what they start in print, and as their cursive improves, that (standard) becomes the image of what they’re seeking.”

Cahutay said that “kindergarten is awesome,” and that Vogtman “is nice.”

The May 24 ceremony included Cahutay’s parents, Ruan and Elmer. Their 6-year-old daughter received a trophy and a $1,000 check from Zaner-Bloser, which presented certificates created by its master penman to the school and Vogtman.

She has never been to Boston, where she’ll spend four nights in July, courtesy of Zaner-Bloser. It is a nod to a career that she traces to her childhood.

“I wanted to be a teacher since I was 6-years-old,” Vogtman said. “I can remember being very small and having a blackboard in the basement.”

She was taught by the Religious Sisters of Mercy, at Immaculate Heart of Mary School in Baynesville, and then Mercy High School. This is her 11th year at St. Joseph School, following 20 years at the former St. Dominic School in Hamilton.

“When I first started teaching, we didn’t incorporate handwriting into reading the way we do now,” Vogtman said. “Now, we incorporate it across the curriculum. … People do need to recognize the importance of handwriting for little ones. My children love that they can print a sentence, and read it.”

The grandmother of four has a keen appreciation for the finished product.

“A handwritten letter from one of them is so much more personal,” she said. “I hope it doesn’t become a lost art.”