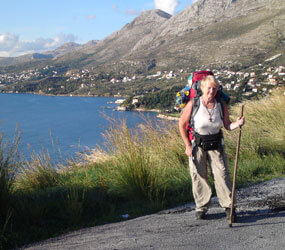 JERUSALEM – Ann Milner, 61, sensed she was being called by God, so she left her home in England for the nearly 2,000-mile pilgrimage from Rome to Jerusalem.

She set off on foot from Rome June 24, 2010, and arrived in Jerusalem June 2. There, she sought refuge in a convent because, having spent so much time on her own, she said, she found the enclosed environment of the Old City intimidating.

Milner walked with a collection of written prayer requests from people she met along the way. During her pilgrimage, the member of Our Lady Immaculate and St. Andrew Parish in Hitchin, England, stopped and prayed at every church and shrine she came across; she said some parishioners had requested that she place their written prayers in Jerusalem’s Western Wall.

“In Turkey, I stopped and prayed outside mosques because I felt they were holy places,” said the soft-spoken retired computer professional, Pax Christi volunteer and mother of adult two sons. “I prayed each day for peace.”

Though originally she had planned to make the entire trek from Italy through Albania, Croatia, Greece, Turkey, Syria and Jordan on foot, the political realities of the region forced her to reconsider, and she stopped her foot pilgrimage at Ephesus, Turkey. She traveled by plane and bus to Israel.

She made the pilgrimage in two stages, returning to England in mid-January to undertake an eight-day silent Ignatian retreat in preparation for the next part of her walking pilgrimage.

At one point, she said, she almost felt compelled to give up the pilgrimage after a series of difficult events took place over a short period of time as she was approaching Ephesus. She was unable to extend her travel insurance; a child threw a stone at her; a man who had offered her a ride on his scooter almost attacked her; and she ran into a pack of particularly aggressive dogs.

“I had walked thousands of kilometers and never had experiences like that,” Milner said. “But because all those incidents happened quite close together I got really unnerved. So I prayed and, in the end, I felt I could take precautions and continue, trusting in God.”

She said one of her best experiences took place in Kavala, Greece, the port where St. Paul landed. She ran across what appeared to be an old Roman road and followed it to the port. Only afterward did she discover it might have been the road St. Paul took.

In all, people responded “really brilliantly” to seeing her in countries with Catholic, Orthodox and Muslim traditions, and people would often stop and ask if she needed help, she said.

“They told me how wonderful it was and how brave I was,” she said. “But I said I am not brave, I am trusting in the power of faith and Our Lord.”

“People’s prayers and faith kept me going,” she said.

“This has made me much more trusting in God and strengthened my faith to become closer to God,” she said. “I am just a small person; I am not part of an organization, but I can do what I can do. I can pray and I can tell people what I have done and tell people about Pax Christi. I am may be totally insignificant, but if just one person begins to pray for peace or becomes more open-minded because of what I have done, then it has been worthwhile.”