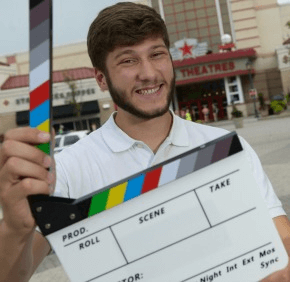 First in a series, “How I Spent My Summer Vacation”

Matt Myslinski has found success while pursuing his passion.

A rising senior at UMBC in Catonsville, the film major recently visited France, where his short film, “Lightyears,” was screened at the Cannes Film Festival, one of cinema’s most prestigious showcases.

Though the script only took him an hour to write, Myslinski has spent his whole life honing his skills as a filmmaker.

“Making movies has never really not been part of my life,” the young director notes.

Myslinski began making movies at a young age, using the family video camera to make stop-motion videos with LEGOs. By the time he was in middle school, he began to earn accolades, winning the Howard County Green School Film Festival in 2006.

Filmmaking takes a lot of dedication, discipline and management, attributes Myslinski acquired in his youth.

He was an active member of the Church of the Resurrection Parish in Ellicott City, where he was an altar server, a member of the youth ministry and a musician in the church band for youth Masses. He also joined Boy Scout Troop 944 at Bethany United Methodist Church.

“The Boy Scouts taught me everything: communication, planning, financial management,” he said. “These are all things that filmmakers need to be successful.”

Like one of his major inspirations, Steven Spielberg, Myslinski would eventually make Eagle Scout, though he notes, “ironically, I never got the cinematography merit badge.”

Even though his talents were apparent from a young age, most people around him thought his love of film was just a passing phase, and when he got older, he would get into a “more suitable” line of work.

“There was a time when not a single person supported me in what I wanted to do,” he said.

He said his parents, Norbert Myslinski and Rene Carter, were among the skeptics, but Myslinski pressed on and kept making movies with friends who shared his passion, and with whom he formed a production team, Donut Guy Productions.

“Our philosophy,” he said, “is make to movies for yourself, but also submit them for class.”

Myslinski wrote and produced “Lightyears”for a competition, the Campus Movie Fest. He chose to do a sci-fi film because he had never ventured into the genre. While it took an hour to write the script and one week to shoot, it required three and a half months of preparation.

“Everything,” he said, “had to be planned to the hour.”

He also submitted the film for review to the Cannes Film Festival, and in March, he received the good news that it had been selected. Myslinski traveled to the French Riviera, where “Lightyears”was screened independently May 20. After spending more than two weeks in France, and also showing his work at the Columbia Film Festival in June, Myslinski is back to work on his next film, a 40-minute neo-noir called “A Goodly Manner,” whch he hopes to premier next spring.

After he had decided to pursue film in college, he said, his mother “never thought I’d be working on an Emmy-winning TV show,” but Myslinski has proven that filmmaking could be a career just as “suitable” as any other. He has found work as a production assistant on various sets, working on nine feature films and on the Netflix series, “House of Cards.”