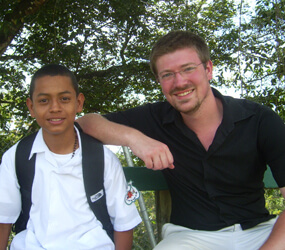 The motto of Loyola Blakefield in Towson stuck with David Brokke, Class of 2005.

Like other college seniors, Brokke headed to the Yucatan Peninsula for spring break last semester. Unlike those who went to work on their tan, Brokke and fellow students from Franciscan University of Steubenville in Ohio were performing service in the nation of Belize.

Moved by his educational background and the Holy Spirit, Brokke will return to Belize later this month, to teach religion to ninth and 10th-graders in a community stunted by gang violence and poverty.

The sense of satisfaction he derives from making a difference?

Brokke’s mission should come as no surprise to his teachers at Loyola, where he sang in the choir, was co-chair of the Respect Life club, and volunteered at soup kitchens and a home for adults with mental disabilities.

That sense of service was honed further at Steubenville, where Brokke earned a degree in catechetics and theology. When he considers his career options, high school religion teacher is at the head of the list. He has several solid role models to draw upon.

Among the Loyola influences he cites are James Dubyoski, the former coordinator for the Respect Life club at Loyola Blakefield, and Dr. Frederick H. Wise, a religion teacher.

“I loved his (Wise’s) class, he had a passion for the faith,” Brokke said. “The example of teachers who went to daily Mass, you don’t forget that.”

Brokke, it turns out, also left an impression.

“The word that comes to mind when I remember David is pure-hearted,” Wise said. “He’s a sincere person, a fantastic kid with a very deep and mature faith. He expressed what his faith meant to him, in the classroom and in one-on-one conversations.”

Besides Belize, Brokke has taken his faith on a pair of missions to Jamaica and one in Denver.

“The interesting thing about mission is that it’s not over when it’s over,” Brokke said. “When you come home and share stories and stuff that happened, you’ll hear people say, ‘I want to do missionary work as well.’ People are thirsting for God, and they get to participate in that.”

A 22-year-old parishioner of St. Agnes in Catonsville, Brokke is grateful for his parents, Vernon and Gwendolyn, and others, like Tom and Jan Vidmarhart, the parents of friends, who have helped him raise funds for airfares.

In Belize, he’ll be living in the town of Benque Viejo del Carmen, teaching at Mount Carmel Catholic High School, through the auspices of the Society of Our Lady of the Most Holy Trinity.

He’ll share a small room, in housing that includes running water but no hot-water heater. Cold showers are easier to take, knowing the hardship endured by some students in an ethnically diverse nation bounded by Mexico and Guatemala.

“It definitely can be heartbreaking,” Brokke said, “seeing the plight of some of the people, but the overwhelming sense of peace and hope is so much stronger than the distress you see.”

Brokke is looking forward to re-experiencing the natural beauty of Belize.

“No one has air conditioning, a telephone or a laptop, but that’s OK,” Brokke said. “The silence of nature, it’s so easy to see and hear the work of God.”