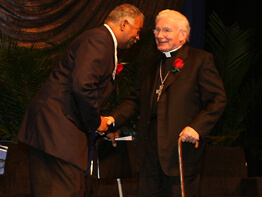 As Monsignor Thomas Kujovsky witnessed nearly 2,000 well-wishers pour into the Baltimore Convention Center Sept. 6 to pay tribute to his high school classmate – Cardinal William H. Keeler – his observation about the retiring 14th Archbishop of Baltimore is beloved was confirmed.
“This sort of says it all,” said the retired Monsignor Kujovsky, who graduated with Cardinal Keeler from Lebanon Catholic High School in Lebanon, Pa. in 1948.
He and nine others from the Diocese of Harrisburg made the trip from Pennsylvania to honor the cardinal as he prepares to turn over control of the United States’ premier see to Archbishop Edwin F. O’Brien, who will be installed as the 15th Archbishop of Baltimore Oct. 1.
“We are very proud of Cardinal Keeler,” said Monsignor Kujovsky, who remained friends with his former classmate and traveled to Rome in 1994 to witness Pope John Paul II elevate him to cardinal. “Of the 66 graduates in our class, he went on to become a prince of the Church and the archbishop of the premier see.”
Retired Monsignor Paul Byrnes, who made the trip from Deep Creek Lake, said he wasn’t surprised by the huge crowd at the tribute dinner, because the cardinal isn’t only recognized for his ecumenical and interfaith efforts within the archdiocese, but throughout the world.
Religious leaders from throughout the country journeyed to Baltimore for the bountiful affair, including Jewish, Muslim, Orthodox and Protestant religious chiefs, and high-profile political and elected officials.
“Cardinal Keeler is universally adored by people of all faiths,” said Rabbi Joe Ehrenkrawz of the Center for Christian-Jewish Understanding at Sacred Heart University in Fairfield, Conn. “There is nobody better than this man in bringing people together.”
As the John Carroll School, Bel Air, band filled the reception area with the sounds of “Respect,” former U.S. Sen. Paul Sarbanes said he was relieved the cardinal would continue to lend his support to the Basilica of the Assumption Historic Trust and interfaith dialogue endeavors.
“He has done so much for the region and I’m so pleased that he will continue to be a presence, even in retirement,” Mr. Sarbanes said.
When Havre de Grace resident Nancy Elder thinks about Cardinal Keeler, she keeps in mind his efforts to renovate the nation’s first cathedral and how the restoration has highlighted the Basilica’s place in history.
“What a great legacy for him and for Baltimore,” said Ms. Elder, who is director of religious education at St. Patrick, Havre de Grace.
“The cardinal’s love of heritage and sense of history has insured Baltimore’s leading role in U.S. Catholicism will be preserved,” said Sister Elizabeth Anne Allen, O.P., principal of Mount de Sales Academy, Catonsville. “His personal attention to so many details has been inspiring.”
The personal attention Cardinal Keeler gave Father Brian Nolan when the associate pastor of St. Jane Frances de Chantal, Pasadena, was a seminarian provided him with spiritual strength as he made his journey to ordination in 2001.
“He took the time to get to know each of us personally and I was always impressed by that,” Father Nolan said. “He was very accessible to the future priests. If you wanted to meet with him, he would take the time to do that. It made him a great spiritual father and leader.”
For St. Joseph’s Passionist Monastery Church, Irvington, parishioners Samuel and Louise Moore, the opportunity to participate in the cardinal’s farewell celebration demonstrated to them the depth of Cardinal Keeler’s accessibility to all in his flock.
“I met him at a function at the Cathedral (of Mary Our Queen, Homeland) a few years ago and I was very impressed,” Mr. Moore said. “He is a very kind and gracious man.”
Though she had never been personally introduced to the cardinal, John Carroll School band member Ashley Powers, 15, of Perry Hall said it was an honor to play for the retiring head of the Archdiocese of Baltimore – who has lead the see since she was born.
“He is one of a kind,” said the Rev. H. Gerard Knoche, bishop of the Delaware-Maryland Synod, Evangelical Lutheran Church in America. “He has shown us that a collective voice is a lot stronger than an individual voice.”
Cardinal Keeler’s contribution to ecumenical, historical preservation, world, national and local concerns will guarantee his legacy, Sister Elizabeth Anne said.
“But, the Church goes on,” she said. “Cardinal Keeler built on someone else’s foundation and someone else will continue on with what he has contributed.”