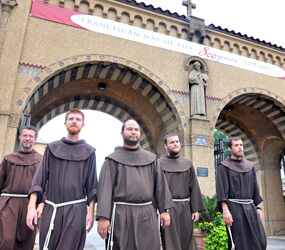 WASHINGTON – With an unflappable trust in God, six Franciscan friars set out on foot one morning from Roanoke, Va., on a trek that would take them 300 miles through the Virginia countryside to Washington.

Carrying few belongings, the friars depended upon the generosity of the people they met along the way for food and shelter during their six-week journey.

The friars chose as their pilgrimage site the Mount St. Sepulcher Franciscan Monastery and Commissariat of the Holy Land in Washington.

The monastery is a popular stop for pilgrims who want a glimpse of the Holy Land. The grounds of the monastery feature dozens of replicas of significant Christian sites from that part of the world as well as from Europe.

Dressed in their brown robes and sandals, leaving the details of their trip up to God, the friars set out on their journey June 16, following the spirit of their wandering founder, St. Francis of Assisi. They arrived at the monastery July 28.

They called their 300-mile journey “Walking With Hope, a Journey of Faith and Discovery,” and set up a Web site about it, www.friarwalk.com.

The trip was the idea of four young friars who were just finishing their training. These young friars had recently completed their novitiate in Cedar Lake, Ind., and took their simple vows before they set out.

Two Franciscan priests served as their mentors on the journey: Father Mark Soehner, 51, from Dayton, Ohio; and Father Ed Shea, 52, from Chicago.

In an interview with the Catholic Standard, newspaper of the Washington Archdiocese, Father Soehner said the hardest part of the journey was to put oneself “out there.” He said it was hard “letting go (of your) own expectations” and trusting God.

The friars depended on God to take care of them during the journey. Their first night, they found themselves at a fire station, covered in ticks from their walk. Behind the station, there was a picnic table and a large trampoline in the woods.

Father Soehner said the friars decided to spend the night on the trampoline. They slept with their toes pointed inward, like “spokes on wheels.” The friars also slept on picnic benches during their pilgrimage.

During another experience, a Native American healer named “Healing Bear” took the friars to his one-room schoolhouse in the mountains. There the friars told him Bible stories.

Van Cleef said the most interesting thing about the journey was that God never stopped “surprising” them. He said the friars learned to live in the moment.

Father Soehner said the purpose of the pilgrimage was to “experience (the) early life of the Franciscan renewal.”

He noted that the Franciscan movement is 800 years old. But with each age, there has been a different way of being Franciscan, he said. Taking journeys was the friars’ tradition from long ago, and the six friars decided to take their journey “to become pilgrims,” he said.

Along the way, people mistook them for the Amish, Jedi knights from “Star Wars,” ninjas and monks. People talked to them about their struggles in life and how God was working in their lives.

“Almost all the way along, (we) experienced nothing but generosity and people’s kindness,” Father Soehner said. Though the two in the group who are priests heard confessions along the way, mostly the friars were there to listen. They continued their prayer life, engaging in morning and evening prayer.

Around 8 p.m. each night, anxiety would set in about how the friars would meet their basic needs that night.

Goodin said then God would start “to work.” The friars often went from having nothing to having more than they needed, and the help would come from different people. But it started with one person taking a “step in faith” to help them.

The friars also once found themselves on top of a mountain without food, water or shelter. As evening neared, a Mennonite gave them directions, a Catholic also offered help, they caught a ride with a Jew, and they ended up sleeping in the home of a Hindu – all within a short space of time.

“God has done miracles in our midst,” Father Soehner said.

Shea said he was “changed by people’s generosity” during the journey, a sojourn that he said demonstrated St. Francis has universal appeal.