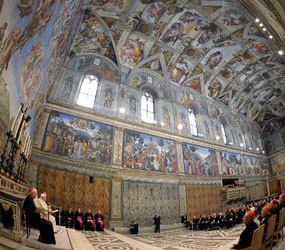 VATICAN CITY – Ask and you shall receive. The art world is ready to collaborate with the church in creating inspirational modern art, said some artists who took part in a landmark meeting with Pope Benedict XVI.

After decades of disinterest or suspicion, the rapport between art and religion is ready to be restored. If the church wants art to support its mission, all it has to do is call.

“The artist is really at the service of society, but to serve you have to be asked,” said John David Mooney, a sculptor and installation artist from Chicago, Illinois.

Polish film director Krzysztof Zanussi told Vatican Radio that the church has to take the first step in approaching artists and getting to know their work “because it’s for sure that artists will never take that step.”

Mooney and Zanussi were among the more than 250 international artists invited by the Vatican in an effort to revitalize dialogue and collaboration between the worlds of faith and art.

For decades the church has expressed a need for beautiful, inspiring modern art for places of worship. It has also lamented society’s overload of superficial, indecent or provocative art that fails to speak to the human soul.

In his address in the Sistine Chapel Nov. 21, Pope Benedict said his meeting with artists was “my invitation to friendship, dialogue and cooperation.” He urged them to think of themselves as “custodians of beauty.”

“Thanks to your talent, you have the opportunity to speak to the heart of humanity, to touch individual and collective sensibilities, to call forth dreams and hopes, to broaden the horizons of knowledge and of human engagement,” the pope said, surrounded by Michelangelo’s stunning frescoes.

Asking artists to be “heralds and witnesses of hope for humanity,” the pope told them to not be afraid to “enter into dialogue with believers” who also see themselves as pilgrims on a journey toward infinite beauty and glory.

In an interview with Catholic News Service Nov. 23, Mooney said the reason why there is so much secular art in the world today is “because the secular world is asking for it.”

Artists are asked by clients, foundations, governments and corporations “to celebrate their mission or at least their presence” all the time, “so we are used to trying to bring a level of transcendence even to the retail world,” he said.

“There’s no problem with the artists between faith and their work at all,” he said, and money is not an obstacle since many artists are not interested in a lucrative deal, but in creating new art and showcasing their unique vision, he said.

“I think that there has just been no communication between the church and the artists, that’s the problem.”

Museums and art collectors have insatiable appetites for new art, he said. “Where is the church asking the artist … to glorify God in new and challenging ways that relate to this culture?” he asked.

“All great art comes from the top,” from the patron commissioning the piece, he said. Patrons need imagination and courage to take the risk of asking an artist to do something without knowing what the end result will be, said Mooney.

When both patron and artist take risks “success can happen and success can be the great moments we look at,” he said, citing Michelangelo’s dome on St. Peter’s Basilica.

Pope Benedict, in his address to artists, said the wrong kind of beauty “thrust upon us (by art) is illusory and deceitful, superficial and blinding, leaving the onlooker dazed; instead of bringing him out of himself and opening him up to horizons of true freedom as it draws him aloft, it imprisons him within himself and further enslaves him depriving him of hope and joy.”

Zanussi told Vatican Radio that art today has reached new lows “because there are no limits.”

The church doesn’t aim to restrict freedom, he said, but it wants to see art be inspired by something great and bigger than itself. “Art, even sacred art, is often very low quality because it wasn’t really spiritually inspired,” he said.

The pope said real beauty touches the soul, it wounds, it startles, “it opens our eyes, (and) then we rediscover the joy of seeing, of being able to grasp the profound meaning of our existence, the mystery of which we are part; from this mystery we can draw fullness, happiness, the passion to engage with it every day.”

Mooney said he and many artists at the papal audience felt inspired by the pope’s message and his encouragement to “focus our work upon and be aware of the eternal truth that the church stands for and the message of the Gospel.”

He said has a special relationship with the world of science and, in fact, he created temporary installations on the roof of the Vatican Observatory when it was atop the papal palace in Castel Gandolfo.

“Physicists and astrophysicists love the unknown, they love to observe and they love to ask the artist to join them in this quest,” he said, “and that’s the same relationship that should exist between the church and art.”

“It’s a leadership moment,” he said referring to how the church and art can come together once again.

Church leaders should follow up the pope’s message with seminars, discussions, symposiums and “actually start creating exciting places to bring art in.”

One way to do this is to work outside church buildings and bring art directly to the people. “All you have to have is space. A building is the last thing you need.” he suggested.

He said, “You don’t have a living culture unless you have the artists as part of that culture and that’s the bottom line.”