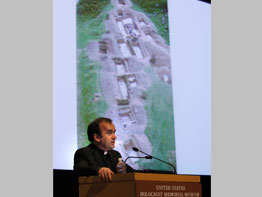 WASHINGTON – Father Patrick Desbois said he will never forget one of the first interviews he had with an elderly man who saw Nazi soldiers murder Jews in Ukraine.

While German music played through a gramophone, the man was forced to dig a huge hole for his fellow villagers’ grave, Father Desbois said during a presentation at the U.S. Holocaust Memorial Museum Sept. 22.

Another witness told the French priest she saw Nazi soldiers bury her village’s Jews alive. The soldiers used one bullet per person and the shots were not always fatal; it took seven days for them all to die, said Father Desbois.

The priest recalled a letter written by a German soldier to his fiance. He said the soldier wrote: “We are playing with the Jewish children like balloons. We throw them in the air and shoot them.”

One elderly Ukrainian woman told the priest that as a young girl, she saw the Nazis order Soviet prisoners to burn the corpses of Jews. When they were finished, the prisoners were locked in a former chicken house and burned alive.

“The fire was so high it climbed into heaven,” she told him.

Since 2001, Father Desbois and a team of researchers and ballistic experts have found 800 of an estimated 2,000 Nazi mass execution sites by crisscrossing the Ukrainian countryside and interviewing elderly men and women in remote villages. The witnesses, most of whom were children during World War II, recount their 60-year-old memories to Father Desbois as if they were in confession.

The priest, secretary of the French bishops’ office for relations with Judaism and adviser to the Vatican on Judaism, and his team also work with the archives researchers at the U.S. Holocaust museum.

The mass graves the team has found are located in the center of villages – they are not hidden in the forests, said Father Desbois.

But without memorials or plaques marking the sites, he said, there is no sign anything ever occurred.

About 1.5 million Jews were killed by the Nazis in the Ukrainian forests and ravines in what has become called “the Holocaust of bullets” – a lesser-known part of the Nazi machine that killed 6 million Jews, most of whom were gassed and burned in concentrations camps.

“We will not let our brothers lie in the field while we lie in our beds and sleep quietly,” the priest said.

“What will we say to them when we see them in heaven?” he asked. “We didn’t have time to bury you?”

His journey to Ukraine is an unlikely one. As a child, Father Desbois pushed his grandfather to tell him stories about his imprisonment as a French soldier in Ukraine’s Rava-Ruska Nazi prison camp.

It was bad for the soldiers, his grandfather said, but it was worse for “the others on the outside.”

The need to find out who the “others” were continued to nag Father Desbois.

While leading a pilgrimage to Poland as a young priest in 1990 it became apparent to him that the group knew very little about the Holocaust. He began studying Judaism to counter this ignorance, taking part in seminars on the Holocaust at Jerusalem’s Yad Vashem Holocaust Memorial and spending time in Israel learning Hebrew.

Father Desbois said it is important for him, as a Catholic priest, to do this work because Pope John Paul II called the Jewish people “our brothers.”

“Sooner or later, we had to act,” he told Catholic News Service.