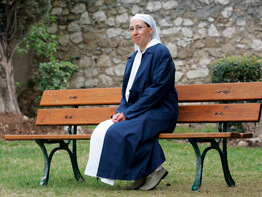 AIX-EN-PROVENCE, France – The French nun who believes she was healed of Parkinson’s disease thanks to Pope John Paul II said her life had “totally changed” since that night two months after the pope’s death.

Sister Marie-Simon-Pierre, 46, is working again, now in Paris at a maternity hospital run by her order, the Little Sisters of Catholic Motherhood.

She met reporters March 30 in Aix-en-Provence during a press conference with Archbishop Claude Feidt of Aix, the archdiocese where the cure took place.

“I was sick and now I am cured,” she told reporters. “I am cured, but it is up to the church to say whether it was a miracle or not.”

However, she said, she knows she is well and that she must continue her work “to serve life and to serve the family.”

Diagnosed with Parkinson’s in 2001, she said that watching Pope John Paul deteriorate from the effects of Parkinson’s disease “I saw myself in the years to come.”

Pope John Paul died April 2, 2005, and as Sister Marie-Simon-Pierre’s condition began to worsen, all the members of the Little Sisters of Catholic Motherhood in France and in Senegal began praying to Pope John Paul to intervene with God to heal her.

By June 2, the religious has said, she was struggling to write, to walk and to function normally.

She said she went to bed that night and woke up very early the next morning feeling completely different.

In a March 29 statement, Archbishop Feidt said that after hearing about the alleged healing of Sister Marie-Simon-Pierre he decided to conduct “a thorough investigation” to determine whether it might be the miracle needed for Pope John Paul’s beatification. In general, the church must confirm two miracles through the intercession of the sainthood candidate before canonization.

The archbishop said the investigation took a year to complete.

The postulator of Pope John Paul’s sainthood cause, Monsignor Slawomir Oder, said the investigation included testimony from theologians and canon lawyers, physicians, a psychiatrist and a handwriting expert, since the legibility of a patient’s handwriting is used as an indicator of the progress of Parkinson’s disease.

Archbishop Feidt and Sister Marie-Simon-Pierre planned to attend the April 2 ceremony in Rome marking the end of the diocesan phase of Pope John Paul’s cause and to attend the memorial Mass Pope Benedict XVI was to celebrate to mark the second anniversary of his predecessor’s death.

While in Rome, Archbishop Feidt was to deliver all the documentation regarding the nun’s case to the Congregation for Saints’ Causes, which will conduct its own investigation into the alleged healing.