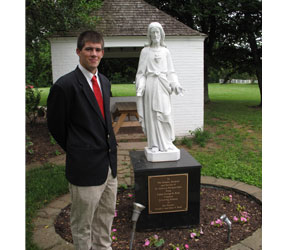 FREDERICK – One day when his dad was working on the roof of a cabin, 4-year-old Dillon Fitzgerald decided to climb a 10-foot ladder and see what was happening.

“I looked over his shoulder and said, ‘Daddy, whatcha doing?’” remembered the now 18-year-old parishioner of St. John the Evangelist in Frederick who graduated May 28 from St. John’s Catholic Prep in Frederick.

Startled, Fitzgerald’s father made the youngster take a seat on the flat roof, where the boy happily observed his dad at work. Before long, Fitzgerald became a regular visitor at his dad’s construction sites.

“He’d give me hammers and nails and let me try new stuff on the scrap wood,” Fitzgerald said. “Once I got to be 12 years old, he paid me to work. I really learned some skills that a lot of homeowners would want.”

Fitzgerald’s passion for construction will take on new dimensions this fall as he begins studying civil engineering and business at Rensselaer Polytechnic Institute in Troy, New York. After completing his studies, he hopes to return to Frederick County and help expand the family business, Fitzgerald Heavy Timber Construction, Inc. The company specializes in restoring old wooden structures.

Fitzgerald recently helped put a new roof on a covered bridge in Thurmont and was involved in converting an old barn into a house.

“We get lots of interesting calls on old houses to work with, but I’d also like to try and build new structures where rustic meets modernity,” Fitzgerald said, “where you have rough-saw wood showing and, in between, there’s plaster and drywall and an interior design. It’s a very green way to build.”

Fitzgerald is just as passionate about building other areas of his life. He’s been active in his parish’s youth ministry program and participated in state and international initiatives run by the Hugh O’Brien Youth Leadership program. He was also a peer minister.

At St. John’s Catholic Prep, Fitzgerald was a defender on the lacrosse team all four years – serving as captain in his graduating year. Even though he broke his jaw right before the playoffs, he still showed up to cheer on his team.

“Dillon does well academically because he works hard at it,” said Chris Cosentino, principal. “He doesn’t take things for granted.”

Cosentino remembered that when a student died last year, classmates instinctively turned to Fitzgerald for support.

“Dillon was one of the rocks that people leaned on,” he said. “He has that strong personality. He’s very mature for his age and he’s able to connect with adults and young people alike.”

Thanks to the family business, Fitzgerald knows that a strong foundation is important. Catholicism is his rock.

“I do take my faith seriously,” he said. “I’m always looking to make it better.”