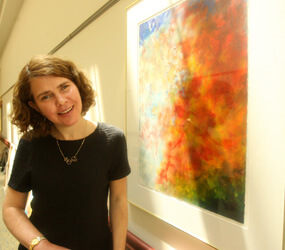 The talent belongs to Christine Conko.

Its continuing development and dissemination lean on loving parents and support that reflects their lifelong involvement in the church.

“There is no way we could get through this without our faith,” Jim Conko said, of the challenges that he, his wife, Theresa, and their daughters Christine and Caroline have faced. “We put everything in the Lord’s hands, especially after the second hemorrhage. We thought she (Christine) was going to die.”

The vibrant abstract art of Christine Conko, currently on display at the Urbana Regional Library in southern Frederick County (see accompanying brief), betrays little of the uncertainty that defined her existence two decades ago, nor her current reality.

Christine Conko, 42, is legally blind, suffers from partial paralysis on her right side and speaks with some difficulty. Those conditions are the result of arteriovenous malformation, which according to multiple medical Web sites causes blood vessels to tangle and form poorly.

When it occurs in the brain, AVM can cause severe damage, but there was little foreboding when Christine complained of headaches while a student at Linganore High School.

A brain hemorrhage disrupted her senior year there and led to surgery at The Johns Hopkins Hospital in Baltimore, but her career was soon back on track. “Xine” honed a distinctive vision and her own brand – a lightning bolt and tears dripping from an X – panache that took her from Frederick Community College to Towson University.

Christine was a college senior in Sept. 1989, when a second hemorrhage left her in a coma for eight months.

She received intensive stimulation during two stays at a rehabilitation center in York, Pa., which were sandwiched around a longer recovery at Washington State Hospital in Hagerstown. Buoyed by others and their faith, Christine’s parents ignored a recommendation to institutionalize her permanently.

Fellow parishioners of St. Peter the Apostle in Libertytown, some friends but others strangers, crossed the Blue Ridge to stand vigil in Hagerstown. That spirit left an impression upon her speech pathologist, who was readying to enter the seminary.

“It seemed like someone was at Christine’s bedside around the clock, in particular, her mother,” said Father John J. Jicha. “She had a rather dramatic improvement, began to follow commands and show signs that she could begin eating on her own. It was a gift, to see the transformation.”

Father Jicha is now the associate pastor of St. Jane Frances de Chantal in Pasadena. From 2002-07, he was the pastor of St. Ignatius in Ijamsville. His maintenance facilitator for several years was Jim Conko, who, it seems, is never far from church.

He and his wife were raised in Connellsville, Pa., where they attended Catholic schools from the first through the 12th grades. As Christine recovered from that first surgery at Johns Hopkins, they attended Mass and prayed at a nearby church. After Christine emerged from a comatose state in spring 1990, her parents took her to a healing Mass in Emmitsburg, mindful that her rehabilitation was just beginning.

“The intention was there, that’s part of the miracle,” said Jim, who saw his oldest daughter move from wheelchair to walker to cane.

“Everyone in church knows the Conkos,” said Monsignor John A. Dietzenbach, their pastor from 1994 until recently. “A lot of people gather around Christine after Mass, to talk to her. It’s a very positive experience for them. She is quite talented and a beautiful person. She has a beautiful heart.”

Along with church, art remains a large part of her life. Instructors like Ed Ramsburg patiently assist Christine, mixing the acrylics that she applies to canvas.

The Conko home in Monrovia could serve as a museum. A bedroom has been converted into her studio, its walls splashed with color. Taking a visitor on a tour, she points to a wall in the master bedroom and the subtle hues of green in a work titled “Song of the Hills.”

Who, Christine was asked, inspires you?

Her mother, who works at Frederick Community College, is her business manager. Her father, a retired computer specialist, frames her art.

Told that her creations evoke Impressionist masters on display at the Louvre, Christine was ebullient.

Approximately two dozen of Christine Conko’s paintings are on display at the Urbana Regional Library in Frederick County until July 28. For directions and hours, telephone 301-600-7000.