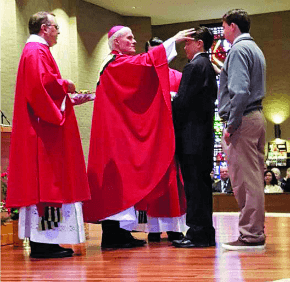 Archbishop William E. Lori has expressed gratitude for Bishops Adam J. Parker and Mark E. Brennan, newly ordained auxiliary bishops of Baltimore, both of whom have gotten right down to business.

“In their service as bishops, they will be of great support, not only to me, but also to you, as together we set about strengthening the work of evangelization in the Archdiocese of Baltimore,” the archbishop wrote in a Jan. 24 letter to priests of the archdiocese.

Archbishop Lori also shared that he has returned the archdiocese to the three-vicariate system, with urban, eastern and western vicariates.

Bishop Parker will continue his ministry as vicar general and moderator of the curia, while “administering the sacrament of confirmation as needed throughout the archdiocese,” Archbishop Lori wrote.

Monsignor Hannon explained in an email that the area vicars represent the archbishop to the pastors and parishes of their vicariates.

“One important goal of the area vicars,” he wrote, “is to be someone who works both with (the Catholic Center) and with the pastors and their parishes to ensure that communications are clear, that ‘bridges’ are built and maintained. We work with pastors on any number of items.”

The vicars, Monsignor Hannon added, will likely play an important role as parishes form pastorates to advance the archbishop’s vision of an evangelization-based structure.

“As (western) vicar, I have conversations with pastors about plans to work with other parishes in sharing resources for efficient planning,” he noted.

Bishop Parker wrote in an email, meanwhile, that his first confirmation was to be at Our Lady of the Fields in Millersville, where he was confirmed 30 years ago. Bishop Brennan, who served most of his ministry as a priest of the Archdiocese of Washington, did his first confirmations as bishop at St. Joseph Parish in Fullerton Jan. 28.

“It felt like home,” said the bishop, who previously served as pastor of St. Martin of Tours in Gaithersburg, a parish with a large immigrant population.

Bishop Madden, retired in principle but far from it in practice, said he will feel right at home as urban vicar. His Baltimore experience dates to 1973, when he arrived to live in residence at the former St. Martin in West Baltimore while working toward his doctorate.