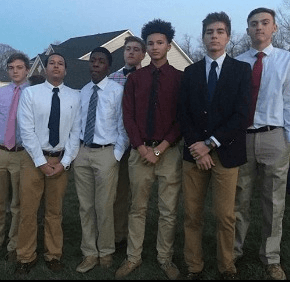 “He was just a genuinely nice kid,” said athletic director Steve Teter, who had helped recruit Hamer for John Carroll because “he was a very talented baseball player and a good kid.”

The accident occurred the morning of March 2. According to reports, Hamer, a 15-year-old sophomore, was the passenger of a car traveling on Route 22 in Churchville. When the driver, a relative, turned left, their car was struck by another vehicle.

Joseph Schuberth, communications director for John Carroll, said some staff members found out about the accident before Hamer died, and rushed to the hospital.

“They were with the family when Josh was still alive, and when he did pass,” Schuberth said.

The school held an informal remembrance and vigil for Hamer that evening and canceled classes March 3, but remained open for students who wished to spend time with each other or speak with counselors or campus ministers.

He noted that students were creating a memorial around Hamer’s locker and leaving notes.

Teter said Hamer would have played varsity baseball in the spring. A right-handed pitcher, he was set to leave March 7 for Georgia with the squad for a pre-season tournament.

“He never talked about you and always had something positive to say,” Lloyd added. “He was just a well-rounded dude.”

“In the beginning, me and Josh were like enemies before we came to middle school,” Tipton said. “We always messed with each other.”

They got to know each other better when Hamer played on the same baseball team as Tipton’s twin brother, when all three were in eighth grade.

“You could always call Josh when you were having a hard time,” Tipton said. “He was always smiling, and he always had your back.”

Tipton said that when he heard about the accident, he and his brother left school and drove to see their friend. When they were about halfway to Baltimore, Teter called to inform them that Hamer had died.

“It’s been pretty tough,” Tipton said. “It just all seems so surreal.”

“The school will miss him as a happy, good kid walking the halls every day,” Teter said. “The baseball team will miss his talent and leadership. He’s going to be missed in many different ways.”

According to Hamer’s obituary, he is survived by his mother and father, James and Jennifer Hamer, and three brothers.

A viewing will be held March 6, 6-8 p.m., at R.T. Foard Funeral Home in Rising Sun. A funeral Mass will be offered March 7 at 11 a.m. at St. Agnes Church in Rising Sun, where Hamer was a parishioner.

To offset funeral and burial costs, The John Carroll School has set up a giving page at johncarroll.org/josh. Schuberth said that any extra funds raised would be purposed toward establishing a scholarship in Hamer’s name.

“His teammates, the school community and the larger John Carroll community has really rallied around (Hamer’s) family and each other,” he said.