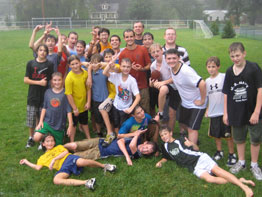 Defenders slipped and tripped past Joseph Gill across the muddy soccer field of St. John the Evangelist, Severna Park. They crashed onto the muddy mess, sending water flying several feet away. Mr. Gill sliced through a torrential rain and kept the ball firmly at the tip of his foot until he buried a shot in the back of an empty net.

Afterward, teammates and opponents swarmed him with congratulatory hugs and “high fives” in a sign of camaraderie. While the region took cover during Tropical Storm Hanna’s Saturday morning arrival Sept. 6, nothing stopped this group of teenagers and young people, known as the parish’s Frassati Club, from relishing every soaked second of game action.

“I love it,” the 24-year-old Mr. Gill would say minutes later in the dry confines of the parish’s youth office. “It’s all for the glory of God.”

Mr. Gill, a seminarian at Mount St. Mary’s University in Emmitsburg, started the club a year ago as he spent his transitional year with the parish.

The club is named after the patron of World Youth Day, Blessed Pier Giorgio Frassati, and serves as a mix of sports and spirituality. About 20 young people, mostly boys, arrive at the parish every other Saturday for 8:30 a.m. Mass, followed by sports activities intertwined with talks about the week’s Gospel reading and personal reflections. One minute, participants are playing Frisbee and in the next they are talking about the power of forgiveness.

They leave the bi-weekly meetings spiritually nourished and physically exhausted.

“In Severna Park, the major religion is sports,” Mr. Gill said. “We have so many people around here whose lives revolve around sports. We’re trying to evangelize through athletics and show they’re not mutually exclusive.”

The club has attracted an assortment of young people thanks to Mr. Gill, whose youthful appearance can often lead him to blend in with club members.

“I was considering not being a Catholic,” said Bridgette Trice, a sophomore at Severna Park High School and one of a few regular girls at the Frassati Club. “At the time, I thought I was Atheist. He completely turned me around. Every little thing, he’ll slip in something religious, but he makes it fun.”

The fact that young people come to the parish for a Saturday morning Mass is something of a minor miracle. While many children and teenagers are sleeping, playing their Nintendo Wii or watching Saturday morning cartoons, young people at St. John are finding an outlet for their energy and a spiritual mentor.

Mr. Gill, a lifelong parishioner of St. Peter the Apostle in Libertytown, uses his own low-key personality to set the tone for the Frassati Club. The goal is to make each gathering devoid of intimidation, while fostering spiritual and athletic interests.

After the club ended its Sept. 6 session by praying the Our Father, Mr. Gill talked to the crowd of young people, knowing each person by name. The club, and Mr. Gill, continue to make an impact on regular attendees.

“He knows our interests and knows what school we go to,” Annapolis High School sophomore Nick Wentworth said. “He really cares about all of us.”