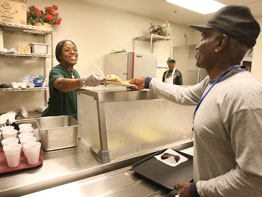 As Baltimore’s Franciscan Center celebrated its 40th anniversary with a block party, Sept. 10, volunteer Ellen Daniels stood in the hubbub and spoke about how the nonprofit organization was able to help her.

Ms. Daniels, who raised three boys as a single mother, spoke of of using the “clothes floor” offered years ago at the center’s previous Baltimore location. When one son died at 16 from sickle-cell anemia, she said the center assisted some of her relatives who had nothing to wear for the funeral.

Her other sons are grown, and now Ms. Daniels, an auditor for the state, is in her second decade serving as a pantry volunteer for three hours every Wednesday.

“For a lot of them, it’s the only decent meal of the day,” said Ms. Daniels, 58, glancing in the room where Lower Charles Village residents were hovered over their hot lunches. “My heart goes out to them.”

She talked of the center’s evolution, from serving only men, then women.

An average of 400 homemade meals are prepared fresh daily at The Franciscan Center by two chefs who serve Monday through Friday in the former St. Elizabeth School.

The star of the event was founder Sister Irene Marshiano, O.S.F. who said, “This is wonderful!”

She remembers its opening.

“I could see people coming – they were so grateful,” Sister Irene said. “This is God’s work fulfilled – and it’s ongoing.”

Those and other former Colts visit the center annually and offer their support, in a program called Huddle for the Homeless.

Green and white balloons tossed in the breeze along tables of vendors lined up on a side street and the band ceased playing during speeches and introductions.
The mayor’s office issued a Mayoral Citation, and client-focused vendors manned tables to offer information, giveaways and screenings.

Party attendees included board members, invited guests, community residents, clients, and city officials, including councilwoman Mary Pat Clarke, and Barbara A. Robinson, a member of the Maryland House of Delegates, once homeless and on welfare, she admitted in a stirring speech.
.

“You are in charge of your present and your future,” Ms. Robinson spoke to the center’s clients. “Don’t let anyone tell you that you are too dark, too light, too poor … too anything. God plus one is an army. He doesn’t bring you to it, unless he brings you through it.”