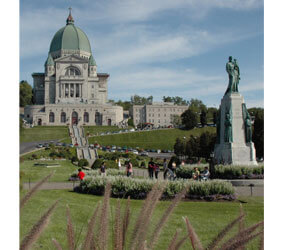 VATICAN CITY – Pope Benedict XVI formally recognized the miracle needed for the canonization of Blessed Andre Bessette, a brother of the Congregation of Holy Cross and founder of St. Joseph’s Oratory of Mount Royal in Montreal.

Known for his intense piety, famed for miraculous cures and praised for his dedication to seeing a shrine built on Mount Royal to honor St. Joseph, Blessed Andre is set to be the Holy Cross Brothers’ first saint.

While Pope Benedict issued a decree Dec. 19 putting Blessed Andre on the track toward sainthood, no date has yet been announced for Blessed Andre’s canonization ceremony.

In a statement released by the oratory Dec. 19, Cardinal Jean-Claude Turcotte of Montreal said he was happy because “Brother Andre takes pride of place among the builders of our diocesan church.”

In the same statement, the vice postulator for Blessed Andre’s cause, Holy Cross Father Mario Lachapelle, said that with the papal decree “one of the most significant pages in our collective history has been written.”

The congregation’s superior general in Rome, Holy Cross Father Hugh Cleary, said, “What a grace for our religious family to count among its ranks such a model of the Christian life offered to the world, a true inspiration for a welcoming, compassionate presence,” according to the oratory press release.

Born Alfred Bessette on Aug. 9, 1845, in Saint-Gregoire d’Iberville, Quebec, he was one of 12 children and suffered from a chronic stomach ailment that kept him out of school and often without work.

A few years after his father’s death, his mother died, but their piety and trust in God had deeply influenced Blessed Andre. When he reached the age of 18, he set out for New England in search of employment. He spent four years working in cotton mills and farms in Connecticut, Massachusetts and Rhode Island.

In 1867 he returned to Canada and sought the help of his childhood parish priest, Father Andre Provencal. The priest encouraged the young man to pursue his desire to enter into religious life.

When Blessed Andre entered the novitiate, Father Provencal sent a letter to the novice master saying, “I am sending a saint to your congregation.”

At 25, Blessed Andre could not read and his health was so fragile the Holy Cross brothers assigned him to be the doorman at Montreal’s College of Notre Dame, where the congregation had just opened its novitiate.

The Holy Cross brothers had initially turned the less than five-foot-tall Blessed Andre away from seeking a religious vocation because of his delicate health. In reference to his assignment as doorman, he once quipped, “When I joined this community, the superiors showed me the door.”

For nearly the next 40 years, Blessed Andre contented himself with his humble tasks of welcoming visitors, cleaning the premises and running errands. He put himself at the service of everyone including the students, whom he would tend to when they were ill.

Many visitors would come to the college and ask Blessed Andre to pray for their loved ones who were ill, and many claimed they had been healed. Soon he attracted large numbers of people seeking help and he would give them a medal of St. Joseph, bring oil from a lamp burning before a statue of St. Joseph in the college chapel, anoint the ill and pray with them. News of his power to heal spread as people began to recover.

In response the many healings and conversions, Blessed Andre would always insist it was the work of St. Joseph, not himself.

Blessed Andre’s special affection for St. Joseph inspired him to build a church in his honor. Using the small sums he received cutting students’ hair, as well as donations, the brother was able to build a modest structure in 1904, which he continued to expand as more funding became available. Blessed Andre was named the oratory’s custodian in 1909 as hundreds and then thousands of pilgrims made their way to Mount Royal to meet Blessed Andre and pray to St. Joseph.

The huge numbers of pilgrims flocking to the site compelled the archdiocese to turn the sanctuary into a minor basilica, which was completed in 1966 – almost 30 years after Blessed Andre’s death.

Today the oratory is the world’s largest pilgrimage site devoted to St. Joseph, attracting some 2 million visitors a year.