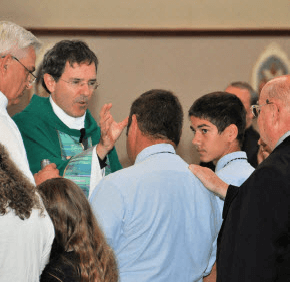 MOUNT AIRY – A third local community of former Anglicans joined the Roman Catholic Church Sept. 23 through the Personal Ordinariate of the Chair of St. Peter, established in January by Pope Benedict XVI.

Seventeen members of Sacred Heart of Jesus in Mount Airy were welcomed into the church at St. Michael Catholic Church, Poplar Springs.

Father R. Scott Hurd, the ordinariate’s vicar general and a priest of the Archdiocese of Washington, received the congregation’s members into the church on behalf of Father Jeffrey N. Steenson, who leads the ordinariate but was unable to attend. Baltimore auxiliary Bishop Mitchell T. Rozanski presided over the Mass, which was concelebrated by local priests of the ordinariate.

Sacred Heart drew members from across western Maryland. Since July 2011, it has been renting the historic St. Michael church – a petite, white clapboard building across the road from the main church – for its Sunday liturgies.

This forged a relationship between the two communities, whose members shared social and educational activities, and now can share Mass.

Niederberger was reconciled and received during the liturgy along with her husband Bob, 63. Both were raised Catholic, but left the church in college and worshipped with several denominations before joining Sacred Heart’s congregation.

Sacred Heart’s former pastor, Dennis Hewitt, 68, an Anglican priest who is now a Catholic layman, is among the five members of Sacred Heart who were received and reconciled into the Catholic Church. Like the Niederbergers, he was raised Catholic, but joined the Episcopal Church when he married.

Hewitt’s wife Ruth and youngest son, Stephen, 33, were among the 12 received and confirmed into the Catholic Church.

Before Sept. 23, Sacred Heart’s members long felt as if they were in rowboat, searching for a large ship to provide safety, Hewitt said.

Many members of the congregation split from the Episcopal Diocese in Maryland in 1994 due to theological disagreements and joined the recently established Charismatic Episcopal Church, a denomination not affiliated with the Episcopal Church, worshipping with the Life in Jesus community in Libertytown. The congregation left the CEC in 2007 to participate in a new diocese exploring affiliation with the Anglican or Catholic Church. It joined the Anglican Church in America in 2009, taking the name Sacred Heart.

The ACA maintains Anglican liturgical practices, but has theological disagreements with the international Anglican Communion, which includes the mainline U.S. Episcopal Church. It is not in communion with England’s Archbishop of Canterbury.

Six formerly Episcopal or Anglican congregations in the Baltimore-Washington area have joined the Houston-based ordinariate since it was established in January.

Sacred Heart is a mission parish of Christ the King in Towson, which joined the ordinariate in June.

Hewitt said his congregation has long identified with Catholic teaching. After Pope Benedict created a personal ordinariate for former Anglicans in England and Wales in 2011, Hewitt led the congregation through an intensive study of the Catholic faith in anticipation of a similar U.S. ordinate.

Of the 23-member congregation, six chose not to enter the Catholic Church through the ordinariate, or are still discerning, Hewitt said.

A retired Department of Defense employee who also served in the U.S. Air Force, Hewitt will not be ordained a Catholic priest, but will continue to serve as Sacred Heart’s administrator.

The U.S. ordinariate functions like a diocese, but is national in scope. Its parishes retain elements of their Anglican heritage.