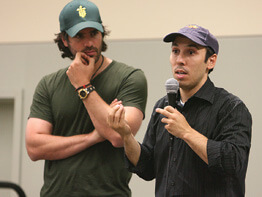 Some 500 youths along with parents and even some grandparents had the opportunity to strengthen their faith June 30, as they participated in a youth rally during the Maryland Family Expo at the Maryland Convention Center.

The rally kicked off with a pre-released viewing of the film “Bella,” which tells the story of an international soccer star whose career abruptly ends and a waitress struggling in New York City.

Afterward the lead actor and co-producer of the film, Eduardo Verástegui, gave a testimony about his journey back to Catholicism. The native Mexican said he got his start in a boy band and then worked his way into soap operas for three years. He eventually moved to Los Angeles where he acted in a couple of films until he realized his “life was empty,” he said. His English teacher, who was Catholic, started to ask him questions about what he wanted out of life, the afterlife and if this was really how he wanted to live.

Mr. Verástegui sought out a priest and confessed his sins. He started to go to Mass every week and eventually every day, and he began to pray the rosary. One day he told the priest that he wanted to go do missionary work in the jungles of Brazil. The priest told him to “stay in the jungle of Hollywood” and that he should open a production company to make movies that will convey a positive and important message.

Since then Mr. Verástegui has been working on the movie Bella, not only to entertain but to touch the hearts of people and inspire them, he said.

“We are not called to be successful, we are called to be faithful,” said Mr. Verástegui.
Bishop W. Francis Malooly, western vicar, who attended the rally, thanked the men for the film. He then turned to the audience and said, “each of you can witness to others about our faith in Jesus.”

Helen Kirby from St. John the Evangelist, Severna Park, said it is great to have an event like the Maryland Family Expo so people can get together and share their faith.
“It shows off our unity,” said Helen. “We want to change the world for Christ.”
Before the night ended more than 100 people met in a small chapel for eucharistic adoration, silent prayer and songs of praise and worship.