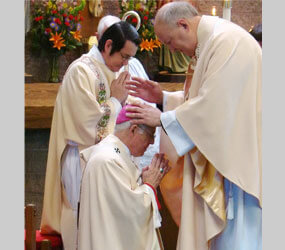 ROME – If using dolls to practice the baptismal ritual is a humbling experience for seminarians, one can imagine what it was like for someone who already had baptized hundreds of babies.

Father Jeffrey N. Steenson, the former Episcopal bishop of the Rio Grande, prepared for his ordination to the Catholic priesthood with seminarians from Rome’s Pontifical North American College.

The 56-year-old, who spent 24 years as an Episcopal priest and three years as a bishop in New Mexico, laughs about the humbling experience of the doll practice and has nothing but praise for the “graciousness and good humor” of the NAC seminarians and staff with whom he’s been working for the past year.

Welcomed into the Catholic Church in 2007 and ordained a deacon in December 2008 by Cardinal Bernard F. Law, the archpriest of the Basilica of St. Mary Major in Rome, he was ordained to the priesthood Feb. 21 by Archbishop Michael J. Sheehan of Santa Fe, N.M.

While he studies with the U.S. seminarians in Rome, Father Steenson and his wife have been living in a cottage on the grounds of the Pontifical Irish College.

Archbishop Sheehan has assigned him to pastoral work in a New Mexico parish for the summer, and then will send him to Houston where he will teach at the University of St. Thomas and at St. Mary’s Seminary.

The Steensons’ three children – a daughter and two sons – are grown.

Educated at Harvard Divinity School and at Oxford, Father Steenson is an expert in patristics, the study of the early church fathers. He spoke to Catholic News Service in Rome March 6 before making one of his frequent visits to the library at the Augustinianum Patristical Institute.

“I’ve been attracted to Catholicism all of my life,” Father Steenson said.

When Pope John Paul II was elected in 1978, he said, “I felt this tug,” but he continued his preparations for his 1980 ordination in the Anglican Communion.

For Father Steenson, the role of the pope as the successor of St. Peter, the servant of church unity and the guarantor of the church’s fidelity to tradition was key to his decision.

“It is not negative things that turned me to the Catholic Church,” he said. “I just felt God saying, ‘It’s time.’”

The time came, he said, in 2007 when he felt the bishops of the Episcopal Church had decided to give priority to their autonomy rather than to unity with the larger Anglican Communion.

Father Steenson said that for him gay people were not the issue. “It was the way the decisions were made and the way they were defended,” placing the local church and modern cultural sensitivities ahead of the universal church and fidelity to tradition, he said.

The priest said that while the Episcopal Church spoke of the importance of Christian unity, it continued to approve practices – ordaining women priests and bishops, ordaining homosexuals and blessing same-sex unions – that everyone knew would be an obstacle to Christian unity.

“The frustration with being a Protestant is that every morning you get up and have to reinvent the church all over again,” Father Steenson said.

He said he struggled with the idea of backing out of his pastoral responsibility to the people of the Episcopal diocese. But Archbishop Sheehan helped him see that “if you can’t lead with a clear conscience, you really owe it to everyone to get out of the way. And that’s pretty much where I was in the Episcopal Church,” he said.

Father Steenson said that while Catholic and Anglican liturgies are very similar externally, “there are profound differences, too.”

For example, he said, “even the high, high Anglicans would have a hard time understanding how absolutely central the Eucharist is to the Christian life” for Catholics.

“Anglicans have a hard time defining what exactly is happening with this. Catholics don’t have that problem at all,” he said.

“This is a silly way to put it, but it just feels more real. I told someone once: the air feels thicker around the Catholic Eucharist” and it’s not the incense, “because we use more incense in Anglicanism,” he said.