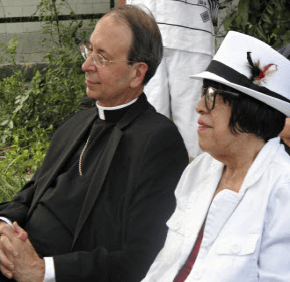 Agnes Welch calls her faith the stabilizing force in her life.

“Faith will carry you through,” said Welch, 87, a parishioner of St. Edward in Baltimore for more than 50 years and a former member of the Baltimore City Council. “You should appreciate the good times, not only pray for help but pray in thanks.”

In honor of her years of service, Agnes Welch Way was dedicated in West Baltimore Sept. 7. Baltimore Archbishop William E. Lori, who attended the dedication, said Welch demonstrates “how to put your faith into action over a lifetime of service.”

The native Baltimorean has spent her life serving others in Charm City.

One of the first black teachers in Catholic schools in the Archdiocese of Baltimore, Welch taught at the former Baltimore parish schools of St. Bernardine, St. Edward and St. Peter Claver.

“Catholic education is a great thing,” said Welch, who noted she is the only person in her family not to attend a Catholic school.

After about three years as a teacher in the late 1970s, Welch was a social worker for the Baltimore City Department of Social Services before serving as a city councilwoman for 27 years. Welch, who said she often prayed the rosary on the council floor, retired in December 2010.

Welch was instrumental in helping to build Rosemont Towers, a senior complex in West Baltimore and introduced legislation that required the city to establish an annual plan for the homeless. She also supported legislation that established a childhood obesity task force.

While she has many political accolades, Welch said it was receiving the Papal Honor Pro Ecclesia et Pontifice at the Cathedral of Mary Our Queen in Homeland years ago that “meant everything to me.”

“It was the most impressive thing in my life,” Welch said. “I was overwhelmed.”

Therese Wilson Favors, director of the Office of African American Catholic Ministries for the archdiocese, said Welch “was a citizen in action prior to her becoming a councilwoman. She really gained a lot of support.”

Welch has been a supporter of African American Catholic ministries, said Favors, in addition to being an advocate for Catholic education and the poor.

“She tried to make change in the community,” Favors said. “Some of the change has been slow, but she’s always advocated for its best.”

“She has done a lot in the past with the parish,” said Father Shao, who noted specifically with senior citizens. “She is there at almost every event we have at the parish. Her heart is in the parish.”