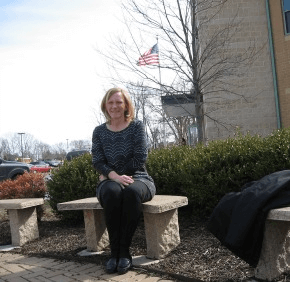 “I feel like they come in little kids and leave big kids,” Manchester said. “From the beginning of the year to the end of the year, their critical thinking skills kind of take off.”

The teacher was recently named the 2014 Catholic School Teacher of the Year by the Knights of Columbus Maryland State Council. Her observations beg a question.

Is she simply seeing her students mature, or is she witnessing the fruits of her own labors?

A proponent of STEM (science, technology, engineering and math) curriculum before it became a buzzword, Manchester has always encouraged her students to think critically. In one of her lessons, students design and build bridges that must meet certain criteria while conforming to specific constraints.

“The students have to be persistent, because most of them fail the first time,” she said.

Working toward viable bridges, the youngsters begin to see through the eyes of the civil engineer, which is one goal of the lesson, a collaborative effort between elementary school teachers such as Manchester, the Boston Museum of Science and Towson University.

“They’re trying to determine if an engineering curriculum in the early grades will give kids a positive outlook on engineering as well as more knowledge,” Manchester said.

The ongoing study fits well with her objective of “getting (the students) to be really good thinkers and problem solvers,” she said.

In many cases, her students take those skills beyond hypothetical. As the year progresses, Manchester said, her students help structure their own lessons.

“I might have two different ways we can approach something,” she explained, “and I’ll ask for their help: What are the pros of this or the cons of that?”

In a recent lesson on biographies of historical figures, Manchester and her students decided to create silhouettes (solid-colored profiles) of those figures.

“They helped me set up the light and figure out how were going to do that,” Manchester said. “I think there’s a lot of learning to go into that decision making.”

“Obviously, you can’t leave everything up to them,” she added.

She transferred to The Catholic University of America.

“The next best major I could find was teaching,” Manchester said. “Once I got into it, I loved it.”

Later, she obtained a master’s degree in special education and learning disabilities from the University of Maryland.

In 2008, Manchester began teaching at St. John, when her daughter entered first grade there.

“I like it very much,” she said. “Everyone has very high standards, academically and behaviorally.”

Manchester’s colleagues are proud but not surprised by her selection as Catholic School Teacher of the Year.

“We’re really excited that she’s being recognized this way,” said Karen Smith, principal of St. John. “She has a passion for teaching and especially the area of science. She’s always preparing exciting hands-on lessons for our students.”

A biography provided by St. John notes that in addition to her teaching prowess, Manchester is an active youth minister at St. Timothy in Walkersville.

The Knights of Columbus honored Manchester on March 22 at their annual Founder’s Day Mass and awards dinner.