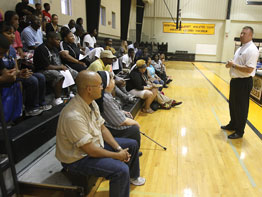 The St. Frances Academy, Baltimore, Panthers, known for their superb basketball programs, recently announced the addition of an independent varsity football program that will hit the gridiron this fall.

Close to 30 students, along with their parents, attended an information meeting at the school June 23 to learn about the program’s goals and timelines, and to meet their new head coach, Mike Clay.

Clay led the St. Mary’s Annapolis Saints to an MIAA B Conference title last season, but his contract was not renewed for 2008 season. Clay was with the Saints for three years, putting the program back on the map and leaving with a 19-12 overall record.

Moving forward, Clay is proud to be a part of St. Frances’ inaugural season, saying “These are exciting times for us here at St. Frances, as this football program will build both team spirit and school spirit.”

As the program gets underway, there will be many obstacles to overcome, none as daunting as the financial commitment that the St. Frances community will face.

Athletic Director Jerome Shelton concurred, saying “It’s a huge undertaking, but something we have talked about for the last 18 months. I think we have found the needed support within the community.”

Sister John Frances Shilling, O.S.P., president of the school, released a statement on June 13, announcing the start of the football program and the overriding goals.

Sister John Frances, an avid sports enthusiast herself, said in a written statement that the most significant goal, above winning games, is the academic, emotional and spiritual development of the students. Football is a means to an end at St. Frances, by promoting student participation in areas outside of the classroom for continued growth and opportunity.

The Panthers were to begin light workouts on June 28 and hit the practice field at Druid Hill Park August 4. For those who are willing to work hard, there will be a no-cut policy in place.

The Panthers plan to play an eight-game independent schedule that will include both varsity and junior varsity teams. Their home field will be Utz Twardowicz Stadium, in Patterson Park.

With 179 boys attending St. Frances Academy, the program will begin with one varsity team while maintaining their participation in the MIAA volleyball league.

“We told the boys at the meeting that they need to do two things; trust us and be loyal to each other,” said Clay. “We’re going to be young and small but we have quite a bit of talent.”