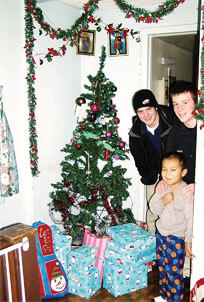 Often a sportswriter will hear, “Hey, have I got a story for you,” and three days before Christmas, Coach Mike Clay from St. Mary’s Annapolis indeed had a story.

Coach Clay, head football coach for St. Mary’s Annapolis, wanted to share a story of the season about junior John Anderson, a three-sport varsity athlete and strong safety for the MIAA B football Conference Champion Saints, and the abundant generosity extended by the team to several members of the Annapolis community.

Throughout the year, the Saints, led by Coach Clay, have continually promoted “giving back” to their families, their school and their community. This Christmas, Anderson and a dozen of his teammates got into the holiday spirit and joyfully made two families’ Christmas very special.

This is an excerpt from an email sent to Sportswriter, Sue Thompson from St. Mary’s John Anderson:

I wanted to tell you again how much this project has meant to me and to have the help and support of my teammates was amazing. Coach Clay has inspired us to be more on the field and in the community. All through our season he showed us how to appreciate our relationships with the fans, each other and the church. This project may have started as an idea to help people but it will be just the beginning. Father. Hoog (St. John Neumann Parish, Annapolis) has taught us to strive for more and to always reach out to make a difference.

St. Mary’s football program will be taking care of these two families throughout the year.

Two weeks ago, Neill Lewnes, Brendan Yunger and I were able to deliver a tree, a tree skirt and three stockings to this family and then Dec. 22, Brendan Yunger and I delivered presents and a Christmas dinner to the first family that lives in downtown Annapolis. They had three children; a 1-year-old baby, a 4-year-old and a 13-year-old. In the afternoon, Coach Clay, Father Hoog, Marlon Johnson, Ryland De Pol, Braedon Graham, Brendan Yunger, and I gathered at St. John Neumann to deliver the second family’s presents. Their mother has been deployed to Iraq and this is their first Christmas without her, and the other little boy’s mother passed away from cancer and this is his first Christmas without her. The grandmother brought them to the church, Father Hoog said a prayer and explained that Santa had left their presents here and the St. Mary’s football players were there to help them put them in bags to take home. Project contributors include Marlon Johnson, John Anderson, Ryland De Pol, Brendan Yunger, Braedon Graham, Conrad Bartleman, Justin Blevins, Peter Boyle, Justin Ely, Taylor Hurst, Neill Lewnes, Mark McNeill, Garrett Norris, Tom Petty, Drew Stanford and Billy Schilling.