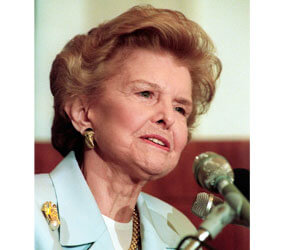 RANCHO MIRAGE, Calif. – Former first lady Betty Ford, who died at age 93 July 8, was remembered for her openness about her struggle with breast cancer and her addiction to prescription drugs and alcohol.

Her admission, unusual for the times, prompted others to find help for their addictions.

Ford, who was co-founder of a California treatment center named for her, was eulogized at a service July 12 in Palm Desert. Her body then was flown to Michigan for a July 14 service and burial next to her husband, former President Gerald R. Ford, who died in 2006.

“Millions of women are in her debt today and she was never afraid to speak the truth even about the most sensitive subjects, including her own struggle with alcohol and pain killers,” former first lady Rosalynn Carter said at a memorial service for Ford at St. Margaret’s Episcopal Church in Palm Desert.

“She got some criticism, but I thought she was wonderful and her honesty gave to others every single day,” she added.

Carter and journalist Cokie Roberts were among those Ford had enlisted to speak at her funeral; she had planned it five years ago.

In her remarks, Roberts noted the bipartisan nature of the 800 people in attendance, saying Ford would have appreciated that. She also noted the late first lady’s unrelenting support for women’s rights, adding that President Ford had once told her Betty pressed him constantly to show greater public support for equal rights.

Ford’s support for women’s rights included being outspoken about legal abortion. During her time in the White House, her praise for the Supreme Court’s Roe v. Wade 1973 decision lifting most state restrictions on abortion brought strong criticism from Catholics.

An interview on the CBS newsmagazine “60 Minutes” in which she said she thought the Roe decision “was the best decision in the world … a great decision” brought a tide of Catholic criticism, according to a 1975 story by Catholic News Service.

She also said that she would not be surprised if her daughter Susan had had premarital sex, and added that in some cases there might be less divorce if people had sex before marriage.

One bishop said Ford’s comments could lead to a “decline in morality and the growth of secularism, extreme personalism and amorality that are tearing at marriages and the very fiber of our society.”

Asked later if the negative reaction had caused her to regret her remarks, she said, “I think I was honest,” but admitted she could have perhaps answered “with a little better judgment.”

On “60 Minutes,” she said she and her husband had raised their four children “in a home that believes in and practices the enduring values of morality and personal integrity.” Regarding her comment on premarital sex, she said she didn’t believe in it but was acknowledging that “many in today’s generation do not share my views.”

Ford’s tenure as first lady was 30 months long. Gerald Ford, appointed vice president in 1973, became the first man to achieve the presidency without election to national office in 1974 when President Richard Nixon resigned after the Watergate scandal.

When Jimmy Carter narrowly beat her husband in the 1976 presidential race and the Fords returned to private life, they moved to Rancho Mirage, which is where Ford died.

In Michigan, Bishop Walter A. Hurley of Grand Rapids called Ford “a visionary first lady who served our country with grace and dignity.”

“She dealt with her personal challenges and bravely shared them publicly. In doing so, she removed the stigma too often attached to certain illnesses. Subsequently, her example freed and inspired others to find help for themselves or their loved ones,” the bishop said.

Ford is survived by her four children, Michael, Jack, Steven and Susan, and their families.