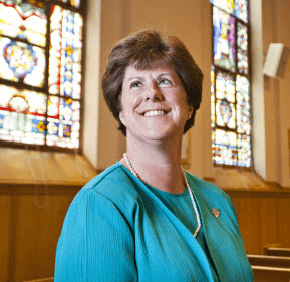 About 12 years ago, Hanna Mignogno was listening to a speaker at a conference when she felt compelled to get up and walk outside.

She sat on a wall facing a statue of the Blessed Virgin Mary, listening to the call from God to enter religious life grow louder and louder.

Sister Hanna, 49, a first-grade teacher at Cardinal Shehan School in Baltimore, professed her final vows as a School Sister of Notre Dame June 16 at the chapel at Villa Assumpta in Towson.

“It’s just a memory I’ll remember and go back to,” Sister Hanna said of that commitment.

Growing up in Pennsylvania, Sister Hanna attended Catholic elementary school and was active in her parish.

She first heard the calling to religious life – “a brief, fleeting thought” – around age 14, but didn’t give it too much thought. The idea of dedicating her life to God “came back periodically, but it wasn’t something I was ready to think about,” Sister Hanna said.

As an adult, she remained active in parish life, dated and wanted to marry.

“I really did want to do that,” Sister Hanna said. “I didn’t give up on the idea that I wanted a family. I think God was calling me to a different family.”

She moved from Pennsylvania to Baltimore in 2002 to enter the School Sisters of Notre Dame, a religious community to which she was drawn after being a teacher for 20 years.

“It’s just a sense of belonging and praying together,” Sister Hanna said. “I feel very much a part of it, of wanting to be in community and doing what’s necessary for community. It’s together that you grow and change.”

Becoming a religious sister has strengthened her faith and “helped me to live in that faith better,” Sister Hanna said. Before Cardinal Shehan School, she taught at the parish school of Our Lady of Fatima in Baltimore, which closed in 2010.

“I love how uninhibited they are,” she said of her first-grade students. “They say whatever comes to their mind. I love when they get a concept and they want to go on and do more and more.”

“She (Sister Hanna) brings another aspect as a religious woman to our school community,” Sister Michelle said.

When Sister Hanna “responded to God’s call,” Sister Michelle said, “that’s exactly what she did – she responded. I think the key is being open. It does not matter what age you are.”

Father Joseph L. Muth Jr., pastor of St. Matthew, Northwood, who celebrates Mass for the adjacent school, said Sister Hanna warmly welcomed a family to Cardinal Shehan School which had moved to Baltimore from the African nation of Eritrea.

One of the family’s three children is named Hana and was in Sister Hanna’s class, Father Muth said.

“She (Hana) was so excited that she had a teacher named Hanna,” Father Muth said. Sister Hanna “was really great at making this little girl feel at home and making this family feel at home.”

“That’s a beautiful thing, that you’re open to that throughout your life,” Father Muth said. “When God hits, God hits.”