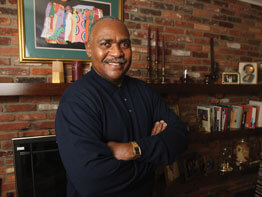 And at 8, he decided he, too, would join the Cub Scouts.

Because he’s black, and the Arbutus troop would not accept blacks then.

“I remember feeling a combination of embarrassment, somehow feeling that I had done something wrong,” Mr. Williams said.

Still, he clung to his dream of being a Scout and, at 11, joined Boy Scout Troop 764 in Halethorpe, proudly donning the signature green Boys Scouts of America uniform as the troop’s second black member.

Mr. Williams, now a 55-year-old Eagle Scout, has been involved in Scouting ever since and just received the prestigious Baltimore County Good Scout Award.

“I learned through my friendships in Scouting that the most important color was green,” Mr. Williams said. “As young men, we had much more in common than we had differences. I developed lifelong friendships through those experiences.”

The Good Scout Award recognizes outstanding leadership among people who exemplify the ideals of the Boy Scouts through community service.

Mr. Williams, a parishioner of St. Pius V, has long worked to help youths in Scouting and beyond.

In the 1970s, he worked in drop-out prevention and work-study programs for juvenile offenders.

Mr. Williams serves as vice president of ScoutReach, which offers free or low-cost Scouting tailored to the needs of at-risk children in Baltimore City and surrounding counties.

A lifelong Catholic, Mr. Williams said: “I was fortunate to have three strong moral guiders in my life: first, my family; second, my church; and third, the Boy Scouts of America.”

Today, too many youths, lacking guidance and positive role models at home, turn to gangs or drugs, said Mr. Williams, the father of two grown sons.

Scouting, he said, gives boys, whatever their background, a sense of belonging and a strong foundation.

“It provides a moral compass and a fellowship of interests and ideas,” Mr. Williams said. “Through Scouting, you get to expand your world and experience new thoughts and ideas and meet individuals who come from different backgrounds.”

Mr. Williams, who also serves on the board of the Baltimore Area Boy Scouts, acknowledges Scouting has waned but hopes to expand it so it reaches more city youths.

A vocalist and an avid fan of jazz and classical music, Mr. Williams performs with the Concert Artists of Baltimore – among other things, Handel’s “Messiah” at the Meyerhoff Symphony Hall – and serves as president of CAB’s governing board.

They’re among his heroes and inspirations, he said.

So is President Barack Obama.

Mr. Williams recalled watching the returns coming in on Election Night at Bethel AME Church in Randallstown, where he lives.

“And it flashed on the screen that they were declaring Obama the winner, and the first thing that happened to me was I cried,” he said.

Prayers of petition and, certainly, prayers of thanksgiving – for a black president, from a man once banned from the Cub Scouts because he had black skin.