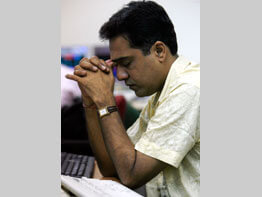 WASHINGTON – To those entrusted with husbanding the financial portfolios of Catholic foundations and institutions, the Sept. 29 rejection by the U.S. House of a $700 billion package to shore up the nation’s financial systems posed new concerns about the economy and those charged with overseeing it.

“The government is saying, ‘Trust us,’” said Frank Rauscher, the senior principal at Aquinas Associates in Dallas, but “there’s no fundamental basis as to why anybody should.”

He noted that the Securities and Exchange Commission had given five investment banks the authority to leverage funds at a rate about three times the standard ratio – “way beyond what anybody else had,” he said.

Those five banks were Lehman Bros., Bear Stearns, Morgan Stanley, Merrill Lynch and Goldman Sachs. The five have been at the epicenter of the financial crisis that has gripped Wall Street since Bear Stearns failed and was quickly sold in March.

“Those five were heavily involved in the whole mortgage problem,” Mr. Rauscher told Catholic News Service in a Sept. 30 telephone interview from Dallas. The House’s rejection of the bailout package was tied by some to the lack of recourse in the measure for homeowners who bought their properties with subprime loans and are now facing foreclosure.

Mr. Rauscher pointed to the case of an Iraq War veteran whose mortgage-default crisis was publicized in The New York Times.

Sgt. Sandra Rolon bought a house in the Bronx borough of New York City for $460,000. Her Army pay was $2,800 a month, but her lender set the monthly mortgage payment at $4,000 a month, saying she could always refinance the loan.

Sgt. Rolon, according to Mr. Rauscher, used her combat-duty pay to make up the difference for a time, and hoped to redo her basement to rent out rooms, but her home improvement and house-sharing efforts fell through. And, “of course, she’s lost everything. The person who put her in that (position) should be in jail,” he said.

Mr. Rauscher said, “If you’re an average guy on the street, why would you trust Wall Street? These are the guys who brought Enron to us. Sometimes it’s a zero-sum game in everything they do. For all the good that they do, there’s got to be somebody who loses some place.”

Since Congress announced its intent to revise the plan, Mr. Rauscher suggested “reversing some of the deregulation and put more of the regulation in. They need to be regulating the mortgage brokers who never before were regulated. They need to regulate the hedge-fund managers.”

And given the spate of bank sales in recent weeks and the fact the sold banks’ executives were trumpeting their stability mere weeks before the sales, Mr. Rauscher, who once ran a bank, said: “I’d be scared to death, not knowing who I should be dealing with. How do I know that they know what their (own) situation is?” – referring to bank executives who aren’t necessarily being told by their bosses what a bank’s real situation is.

The No. 1 criterion for resolving the financial crisis “still has to be the people who are most at the periphery of the financial system and failing the most,” said Oblate Father Seamus Finn, a member of the board of the New York-based Interfaith Center for Corporate Responsibility. “I’m surprised the foreclosure piece didn’t get into” the legislation, he added.

Efforts had been made to bring some kind of relief to those threatened with foreclosure but did not survive in the version of the package rejected by the House, 228-205.