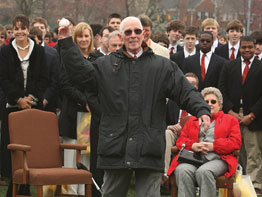 As the Calvert Hall College High School band played “Take me Out to the Ballgame,” standing behind the soon-to-be-dedicated pitcher’s mound, the student-body entered the $1.8 million Carlo Crispino Baseball Stadium and gathered behind the band. It was a proud day for the Calvert Hall community as April 6 marked the official opening of this brand new, state-of-the-art baseball field.

Designed by Ripken Management, this synthetic turf field gives a true hop to every ground ball, and maintenance is much less and field drainage is easier. The field is 300 feet down the lines and 380 feet to straight-away to centerfield.

The honorees of the day were the Carlo Crispino family, seated just in front of the mound. As the dedication got underway before a standing-room-only crowd, Brother Benedict Oliver, F.S.C., school president, stepped to the microphone and began his blessing of the field followed by the national anthem, which was led by the Calvert Hall “Hallmen.”

Carlo Crispino was a catcher at the Hall in 1948. He loved baseball and began a career playing in the Philadelphia Phillies’ minor-league chain. In 1951, Mr. Crispino enlisted in the Air Force and served as a radar specialist. He also spent time coaching the Air Force baseball teams.

In 1959, Crispino worked with the great Al Kaline and from 1956 to 1985, coached teams from the American Legion, the Hearst All-Stars, Towson State University along with former Oriole Billy Hunter, and the University of Baltimore. In short, Mr. Crispino has been an excellent player, coach, mentor and businessman.

“I couldn’t be happier for Carlo and his family,” said Brother Benedict. “He has been wonderful to us, and this gift represents the second major gift in three years.”

Brother Benedict went on to speak about their first baseball field that was graciously donated by the George McManus family. “We have been so blessed over the years. This is a wonderful lasting monument to the generosity of Carlo and his family.”

A 1987 graduate of Calvert Hall and a current guidance counselor and longtime assistant coach at the school, Brooks Kerr said that there is one final phase to this project that would include a clubhouse and locker room area.

After throwing out the first pitch, Mr. Crispino said, “It’s not about me – it’s about the kids, and I hope this stadium remains just as it is for years and years to come.”

The Calvert Hall community presented Mr. and Mrs. Crispino with several gifts, including a large framed jersey, No. 8, representing Crispino’s 1948 season with the Cards.