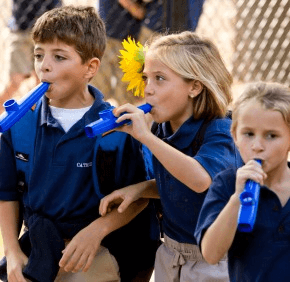 By Catholic Review Staff
Sounding like a swarm of happy bees, all students of the School of the Cathedral of Mary Our Queen in Homeland left classes Sept. 30 blowing into large, blue kazoos. They were “tooting their own horns” for good reason: moments earlier, their school was named one of the best in the nation, receiving the National Blue Ribbon School of Excellence Award from the U.S. Department of Education.
Cathedral School wasn’t the only school in the Archdiocese of Baltimore celebrating.
Immaculate Conception School in nearby Towson and Our Lady of Grace School in Parkton were also named Blue Ribbon schools.
To view a photo slideshow from the day, navigate the arrows below.
See a photo you would like to purchase? Click here.
The designation is the highest academic honor bestowed upon a school by the U.S. government. The schools will be honored at a ceremony in Washington, D.C., Nov. 10-11.
At Cathedral School, students gathered for an afternoon assembly in the gymnasium, where they heard the good news via a video report from WJZ news anchor and Cathedral parent, Mary Bubala. Before the reporter even finished the broadcast, students erupted into applause and cheers – jumping up and down as school leaders blasted colorful confetti over them.
Monsignor Richard Woy, cathedral rector, offered a prayer of thanksgiving before posing a question that elicited some more frenzied cheers: “Aren’t you feeling blue today?”
Jane Towery, principal, told the Catholic Review the Blue Ribbon designation “is a validation and a confirmation of all the tremendous dedication of the faculty, staff, parents and children.”
To become a Blue Ribbon school, she said, standardized test scores are first evaluated. Leadership, teaching staff, educational techniques and parent involvement are then considered.
“We are here today because we are so strong in all of them,” Towery said, drawing attention to the K-8 school’s success in preparing student leaders and involving parents.
Chris Warner, a 12-year-old seventh grader at the 430-student school, called it “really cool” that his school was ranked among the best.
“There are so many schools across the nation,” he marveled, “and we were one that got picked.”
At Immaculate Conception, Principal Madeline Meaney announced the news to students, faculty and staff, and parents in the parish church. To celebrate, teachers handed out cross-shaped whistles and hand clappers, and students clamorously paraded around the church’s exterior before returning to class.
Standing with her eighth-grade classmates, Caroline Shagena said the award is a tribute to her teachers’ good work.
“I definitely feel proud that I go to a hard school and they take pride in academics,” said Shagena, who has attended the school since kindergarten. “They really do love the students here and they challenge you to the best of their ability, and it definitely pays off. I’ve had the best time of my life here for the past nine years.”
Cindy Faherty, 36, watched the excitement unfold while holding her 2-week-old son. Two of her other sons, Jack and Joey, are in Immaculate Conception’s kindergarten and first grade, respectively.
The award “just reinforces that we chose the right school,” she said.
Immaculate Conception began working to achieve the award three years ago. When Father Joseph F. Barr heard the school had received it, his reaction was “relief and joy.” He became pastor of the Church of the Immaculate Conception in 2010, two years after Meaney became school principal. Together, they worked to rebuild the school’s enrollment, which had declined, in part, due to the 2009 closure of the adjacent Towson Catholic High School. Three years ago, there were about 540 students at Immaculate Conception. Now at 576, enrollment is at a 10-year high. The school has also expanded its art and music classes, added robotics and focused on Catholic identity. While aiming for Blue Ribbon School status, it bolstered its math curriculum and ensured faculty received professional development.
Language arts teacher Isabella Litchka spent countless hours working with colleagues on the application.
“It (the award) validates what we’re trying to do and shows that Catholic education is at the forefront of innovation and excellence,” she said.
For the occasion, Meaney wore a blue jacket, skirt and a belt with a blue ribbon.
“Our teachers and our students are amazing – and our parents,” she said. “They are very, very supportive of this school.”
In Parkton, before Our Lady of Grace students received chocolate chip cookies in zip-lock bags adorned with blue ribbons, principal Jeffrey H. Dudley made it a point to include his predecessors in the announcement.
“When I came to Our Lady of Grace a year ago,” he told students, staff and invited guests in the parish hall, “it already had a great reputation.”
He introduced Sister of St. Joseph Helen Wiegmann, the principal tasked with opening the school in 2000, and Byrdie Ricketts, who served in that capacity from 2008 to 2013.
With 117 students in grades K-8, Sister Helen noted that Our Lady of Grace hasn’t departed from the intimate atmosphere established on its first day.
“It was pouring rain outside,” she said. “We sat in this room, and we read every child’s name and then their teacher led them to their class. We started with kindergarten, first and second grade.”
Ricketts, a parishioner since 1991, led Our Lady of Grace after 39 years in the Baltimore County system.
“There are fantastic teachers here, who see it not as a job, but a calling,” she said. “There isn’t person here who doesn’t love this place, from the parents to the teachers to the custodian.”
An archdiocesan STEM (Science, Technology, Engineering and Math) school, Our Lady of Grace benefits there from its relationship with Notre Dame of Maryland University in Baltimore. It has a similar partnership with Loyola Maryland University on the reading front, where its Karl Heldrich Reading Center remembers another parishioner in memoriam.
George P. Matysek Jr., Paul McMullen and Maria Wiering contributed to this story.
Also see:
Gala celebrates education, $140 million capital campaign #photoslideshow
Beyond the Bell: Catholic High robotics team raises the bar
PrevNext