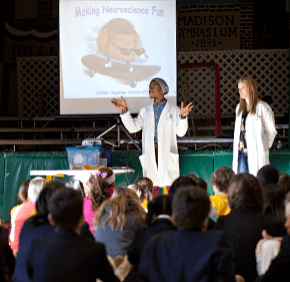 By Catholic Review Staff
Three schools in the Archdiocese of Baltimore earned the National Blue Ribbon School of Excellence distinction Sept. 30.
The U.S. Department of Education bestowed its highest honor on the School of the Cathedral of Mary Our Queen in Homeland, Immaculate Conception School in Towson and Our Lady of Grace School in Parkton.
The schools will be recognized at a ceremony in Washington, D.C., Nov. 10-11.
In 2014, there were 50 private schools nationally to receive the award, including 10 schools ( public/private) in the state of Maryland. Three of those schools were Catholic schools in the Archdiocese of Baltimore.
According to the Archdiocese of Baltimore, the Blue Ribbon program honors public and private elementary, middle and high schools that are either “academically superior or that demonstrate dramatic gains in student achievement.”

Archbishop William E. Lori greets a student at Immaculate Conception School in Towson on the first day of classes in August 2013. Immaculate Conception is one of three elementary schools in the Archdiocese of Baltimore to be named National Blue Ribbon Schools of Excellence. (Tom McCarthy Jr. | CR Staff)
Dr. Jane Towery is the principal of the Cathedral school, which serves kindergarten through eighth grade. Madeline M. Meaney and Jeffrey Dudley are the principals, respectively, of Immaculate Conception and Our Lady of Grace, which offer pre-K through eighth grade.
“It is with great joy that we celebrate the accomplishment of three more Catholic schools being awarded the prestigious designation,” Dr. Barbara Edmondson, superintendent of schools, said in an archdiocesan news release. “This academic honor reflects the excellence of our Catholic schools and the commitment of our outstanding teachers, students and parents.”