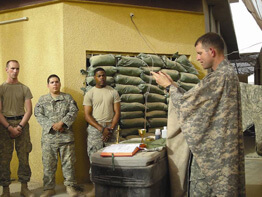 The first time Father Tyson Wood went on a ground convoy after arriving in Iraq earlier this summer, a roadside bomb exploded nearby. No one was hurt and no significant damage was sustained, but the incident was a sudden and sobering reminder that the 40-year-old military chaplain’s ministry would be one of his most challenging ever.

“Travel in Iraq involves some risk,” said Father Wood, speaking in an e-mail interview with The Catholic Review from Iraq. A U.S. Army major and a priest for the Archdiocese of Baltimore, Father Wood is attached to the Multi National Corps-Iraq (MNC-I) headquartered at Forward Operating Base Victory on the outskirts of Baghdad. He is transported via helicopter and ground convoys to celebrate Mass and minister to the armed service members.

“Since I travel just about every day, I find myself identifying with the apostles and early church fathers who risked their lives to share the gospel,” said Father Wood. “This experience has me energized and on fire for our Catholic faith.”

Serving as a military chaplain in a war zone for nearly two months has required tremendous sacrifices. A former Lutheran minister who is married with three children, Father Wood said he misses his family and friends in the Baltimore archdiocese. Everyday living can be uncomfortable, with the average daily temperature hovering around 112 degrees. But the priest believes his ministry is needed and he said he is finding blessings in his service.

Father Wood arrived in Iraq on June 25 – the second anniversary of his ordination to the priesthood. Soldiers are looking for their chaplains to be messengers of peace, he said.

“I make it a point to teach that even in the midst of fear and violence, our lives can be prayers of peace,” he said. “We don’t have to lose our humanity in the war because our faith should shape and form us – not violence.”

In addition to celebrating Mass, Father Wood regularly hears confessions and counsels service members. In the short time he has been in Iraq, he has ministered to injured and dying soldiers and participated in ceremonies honoring the fallen.

“Our service members are working very hard with long hours seven days a week, and, truthfully, they are a bit fatigued,” said Father Wood, who described morale as “high.”

“But they remain great patriots who are committed to this mission,” he added. “Many of them have shared that the surge has helped to alleviate the fatigue because many hands make lighter work.”

Father Wood, who is a former Protestant chaplain in the Army, said he has had limited interaction with the Iraqi people because of the limited nature of his work. But he has observed a “positive response” from the Iraqi Army and the Iraqi police.

“They appreciate our help,” he said.

Father Wood stays in touch with his wife of 15 years, Jennifer, via e-mail and phone calls. Modern technology makes it “much easier” to communicate with loved ones now than when he first joined the Army in 1985, he said.

“Even though our Catholic faith teaches us that sacrifice is part of our life in Christ, it is still hard to miss out on all the little personal family events that you never get back,” said Father Wood, whose eldest daughters are 6 and 9, and whose son is 7 months old.

Father Wood said he has made great friends who sustain him when he’s homesick.

“We’re a real band of brothers,” he said.

The troops could use support from the home front in the form of prayers and care packages, Father Wood said. Care packages with hard candies, gum, wet wipes, shaving cream, razors, ranger rosaries and devotional items are appreciated by the troops and can be sent to MNC-I chaplain office, CH (MAJ) Tyson Wood, Unit #42014, APO AE 09342.