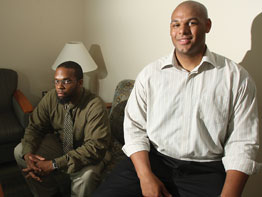 Ahmed Childs sat in the upper level of Catholic Charities’ Our Daily Bread Employment Center looking like a content man.

“I’m happy that I’m here,” said the 34-year-old of his station in life, as a smile crept across his face. “I can’t deny that. I would love to be a millionaire, but I’m definitely happy.”

It was a different story seven years ago.

Mr. Childs was an angry man, he said, who abused drugs and alcohol and had no stable residence.

It was a look from his daughter as he tried to lift her years ago that seared its way into his memory.

Earlier this decade, Mr. Childs was a stranger to his daughter, family, Baltimore and himself. He can now say he “was so mixed up in the street that the law was looking for me everywhere I went. That right there, really, really stung. I was hiding out, and I couldn’t see her.”

Mr. Childs spent so much of his 20s on a dangerous path. His time on Dunbar High School’s legendary 1992 basketball team, recognized by USA Today as the nation’s best, had become a distant memory. He wanted a better life for his daughter and a path to stability through an honest job, rather than the shortcuts he was relying on to survive.

He scoured the city for programs that would help him reclaim his life, but none provided the proper discipline he craved after struggling to stay in college. Then, he came upon Christopher Place. Since opening in 1996, the18-month residential employment program has helped homeless men become productive members of society.

When he enrolled three years ago, Christopher Place was located in a more humble location on Eager Street. Today, it is part of the spacious Our Daily Bread Employment Center, located at 725 Fallsway in Baltimore.

“A lot of (what) Catholic Charities provided for me, was stuff I was looking for,” said Mr. Childs, who graduated from the program a year and a half ago. “I wanted to have some accountability, and when I came to Christopher Place, that’s what it was. You were checked about everything that you did. That was something I had not been used to.”

The first month of the program, referred to as a “blackout,” starts the healing for participants by secluding them from outside temptation. While Mr. Childs was again separated from his daughter, he was also around men of similar backgrounds and aspirations.

“It’s pretty difficult for some of them,” said Carl Howell, program director. “It’s hard to grasp that they can’t be around their families. They almost see it as a contradiction to the program, because the program’s about getting back on your feet and connecting with your family.”

The Christopher Place Employment Academy supplies treatment for those battling addiction. Those seeking a GED are also instructed in resume-building and how to interview for a job.

To officially become alumni, Christopher Place residents must stay employed for a year.

Inside the walls of Christopher Place, the men often form bonds and resolve their personal problems through spiritual encouragement.

Mr. Childs has become a well-respected employee at a local public high school and, more importantly, has a strong relationship with his now 7-year-old daughter.

“Oh, man, she’s all smiles when she sees me,” Mr. Childs said, his grin returning. “She’s crazy about her daddy. I can say that much. That’s this one bond that nobody else has – it’s a father and his daughter. It’s mine and hers alone. She keeps me focused.”

A father’s pride and restoring family ties embody the mission of Catholic Charities and the Christopher Place Employment Academy.

“It’s very touching, it’s moving just to see his face light up,” Mr. Howell said. “It all just summed it up with that smile.”