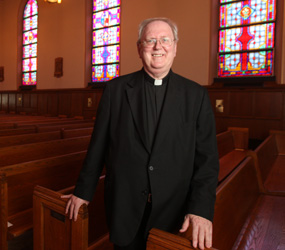 On the day of his ordination, Father Paul G. Holthaus was approached by his second-grade teacher, Sister of St. Joseph Inez Loyola.

She said Father Holthaus made a prophetic claim following his First Communion at St. Mary Star of the Sea in South Baltimore.

“She said I told her I was going to be a priest,” Father Holthaus said.

The 65-year-old associate pastor of St. Ursula, Parkville, admittedly remembers the second conversation more than the first. Now retiring after 39 years of service to the Archdiocese of Baltimore, he’s glad he followed the path.

“If people knew what a joy it is to wake up every morning and to know you’re going to celebrate a Mass, they would beg for a vocation to the priesthood,” Father Holthaus said.

The day after his May 16, 1970 ordination at The Cathedral of Mary Our Queen, Father Holthaus celebrated Mass at St. Jane Frances de Chantal in Pasadena. His family had moved to Riviera Beach in Anne Arundel County and was in attendance for the Mass.

“You just can’t explain it,” the youngest of seven Holthaus children said of the exhilaration he felt that day.

His seminary experience spanned 13 years, starting in 1957. The Second Vatican Council opened in 1962, bringing forth many changes.

“By the time I finished my major seminary training, the church was going through quite a learning process of adapting itself to the modern age,” Father Holthaus said. “I think it was a very exciting time.”

During his priestly career, he’s had two lengthy assignments. He spent 12 years each at Our Lady of Hope, Dundalk, and St. Ursula. His first assignment was at St. John, Westminster. He also served the parishes of The Shrine of St. Alphonsus in Baltimore and Our Lady Queen of Peace in Middle River.

“I felt the Lord was helping them through me,” Father Holthaus said. “In this age where we recognize divine mercy, if you want to experience mercy you come to Christ in the Sacrament of Reconciliation. Our Lord never tires of giving mercy.”

Father Holthaus said the last 12 years at St. Ursula have been fulfilling. He has a hard time expressing his gratitude to parishioners there.

“This parish has many people who come to daily Mass,” Father Holthaus said. “I might see 50, 60, 70 or 80 people at 8 a.m. or 9 a.m. Mass. The people love the Eucharist. The people have demonstrated a great love for the poor. Our people are always giving.”

Father Holthaus has rheumatoid arthritis, which has limited his ability to stand for great lengths. He will live at Mercy Ridge, a retirement community in Timonium.

No matter his physical ailments, Father Holthaus remains as enthusiastic as he did on the day of his First Communion.

“My heart,” he said, “is very much with the priesthood.”