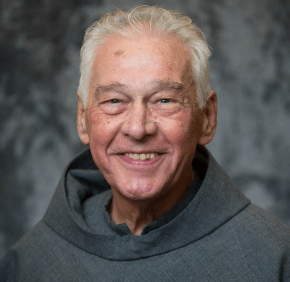 Conventual Franciscan Father Linus DeSantis, who ministered in education for 45 years, died Dec. 1. He was 72.

Born in 1943 in Baltimore, Father DeSantis grew up as a parishioner at the former St. Stanislaus Kostka in Fells Point. After graduating from St. Francis High School in Athol Springs, N.Y., he entered the Order of Friars Minor Conventual in 1961, making his first profession of vows in 1962.

Father DeSantis was ordained to the priesthood in 1971. He earned master’s degrees in divinity and English.

Father DeSantis taught English at Archbishop Curley High School in Baltimore during the 1966 to 1967 school year.

One of his freshman students was Conventual Franciscan Father Donald Grzymski, who now serves as president of the all-boys school.

“He was a good teacher – fairly demanding,” Father Grzymski remembered. “He always had a fantastic vocabulary that he like to use in his presentations and homilies.”

“We used to kid him that he must have had one of those word-of-the-day desk calenders,” Father Gryzmski added.

Father DeSantis returned to Curley in 1976 as assistant principal, and then served as principal from 1979 until 1982.

He also held leadership positions in his order, serving as Guardian of St. Joseph Cupertino Friary in Ellicott City from 1991 to 1994.

As parochial vicar of St. John Vianney Church in Lithia Springs, Ga., from 1994 to 1996, he developed strong connections to young adult ministry and the Secular Franciscan Order. He served the lay order’s southern region as spiritual assistant from 1997 to 2001.

From the 1980s until his death, Father DeSantis served at various colleges as campus minister, including at Syracuse (N.Y.) University, where he was serving when he died.

“Wherever he was, he was always ready to do his work, but also to help if a nearby parish needed a Mass covered or something like that,” Father Grzymski said.

A funeral Mass for Father DeSantis was to be offered Dec. 5 at Assumption Church in Syracuse, N.Y. His body will be brought to Baltimore, and a memorial Mass will be offered Dec. 7, 10:30 a.m., at St. Casimir in Canton.

Note: This story has been updated to correct an earlier version that contained incorrect years when Father DeSantis served at Archbishop Curley.