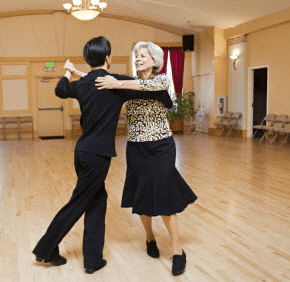 By Elizabeth Lowe
elowe@CatholicReview.org
Twitter: @ReviewLowe
TIMONIUM – “A one, a two, a three, a four, one, two, three, four,” Slava Sergiev counted as he and Dr. Mary Pat Seurkamp rehearsed their dance routine March 20.
Seurkamp, president emerita of Notre Dame of Maryland University in Baltimore, is one of nine dancing stars who will perform a ballroom or Latin-style dance at the 2013 Alzheimer’s Association Memory Ball April 13, a black-tie fundraiser in Baltimore for the nonprofit. Most dancing stars – they are community leaders – are paired with professional dancers.
In preparation for the event, Seurkamp, 66, and Sergiev, her partner and a professional dancer from Belarus, began rehearsing in December. They meet for one hour each week at Towson Dance Studio and Seurkamp practices at home daily.
“Triple step, triple step, one, two turn,” Sergiev instructed. “It’s almost like a spiral. Remember to smile, too.”
The duo practices with and without music for their two minute and six second routine. They are dancing East Coast Swing to the tune Young Blood from the musical Smokey Joe’s Cafe.
“So the triple step should be on my left foot?” Seurkamp asked Sergiev. “We can fudge it, but it would be nice to have it right.”
Baltimore Ravens wide receiver Jacoby Jones has traded his cleats for dancing shoes this offseason. Jones is a contestant on the popular TV show “Dancing with the Stars.”
Seurkamp, who has no prior ballroom dance experience, said learning to dance “has been a lot of fun” but the focus is on raising awareness about the disease and money for the association.
“All of us, in some ways” are touched by Alzheimer’s disease, said Seurkamp, who added her experience with the disease has been through the Notre Dame community and the School Sisters of Notre Dame, who are involved with Alzheimer’s research. The School Sisters established the university in 1873 and later grew it into the first Catholic four-year college for women in the U.S.
“The awareness is not as great as with other conditions,” said Cass Naugle, executive director of the Alzheimer’s Association’s Greater Maryland Chapter in Timonium. “This is really the epidemic of the 21st century. It is the sixth leading cause of death among Americans. There is no treatment or prevention at this time.” Each dancing star typically raises $7,500-$10,000 and the event nets about $325,000, which supports services the association offers, Naugle said.
Seurkamp led Notre Dame from 1997 until her retirement in June 2012. She is a higher education consultant and her work includes serving as senior adviser and director for The Council of Independent Colleges New Presidents Program in Washington, D.C.
If you go:
What: Alzheimer’s Association Memory Ball
When: April 13, 7 p.m.-midnight
Where: Baltimore Marriott Waterfront, 700 Aliceanna St., Baltimore
Cost: $300, corporate sponsorship packages available
For information: 410-561-9099 or alz.org/Maryland
Copyright (c) March 26, 2013 CatholicReview.org
PrevNext