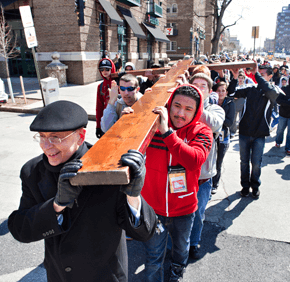 By Elizabeth Lowe
elowe@CatholicReview.org
Twitter: @ReviewLowe
Claire Chambers had been ready for this year’s Archdiocesan Youth and Young Adult Pilgrimage for a year.
“I’m really pumped to see everyone here,” said Chambers, 15, a parishioner of St. Ignatius, Hickory. “It makes me feel really happy to know there are other people who love God as much as I do.”
Chambers was one of nearly 200 teens, young adults and adults from the Harford County parish who participated in the 20th anniversary pilgrimage March 23. This year’s theme was “We Walk by Faith.”
The pilgrimage, held annually on the Saturday before Palm Sunday in Baltimore City, began in 1994 by Cardinal William H. Keeler. It is considered the unofficial start of Holy Week in the Archdiocese of Baltimore.
To view a slideshow of the event, navigate the arrows below.
The pilgrimage is intended to commemorate Jesus’ entrance into Jerusalem at the beginning of Holy Week. More than 750 youths and young adults from more than 40 parishes and schools participated, according to D. Scott Miller, archdiocesan director of the Department of Evangelization’s Division of Youth and Young Adult Ministry. That department sponsored the pilgrimage.
“In a culture that often seems blind to the will of the Lord, it is encouraging to be with so many of our church’s younger members, ‘walking by faith,’ “ Miller said.
This year’s route was changed – and shortened. Pilgrims walked about three miles, compared to the four miles they walked in 2012, with stops along the way on a sunny, blustery and brisk early spring day.
Click below to view a video of the event.
The pilgrimage began in Wyman Park in northern Baltimore City, south of the Johns Hopkins University campus.
During the morning rally at the park, Baltimore Archbishop William E. Lori told those gathered “we’re walking by faith so we can bear witness to Christ.”
The pilgrims then divided into two groups and proceeded to Ss. Philip and James Church and University Parish in Baltimore for eucharistic adoration and outdoor activities. The sacrament of reconciliation was available.
Katelyn Allen, a parishioner of Holy Family Catholic Community in Middletown, relished her first pilgrimage.
“It’s really interactive,” said Allen, 16. “It gives you a lot of opportunities to grow.”
The tradition of carrying a large wooden cross continued. Archbishop Lori carried the cross with pilgrims for several blocks up North Charles Street and walked the route with the faithful. Youths prayed the rosary during the walk.
Like other youths, Chambers said her favorite part of the pilgrimage was the walk.
“I love walking through Baltimore,” Chambers said.
Edgar Okanga, 15, a parishioner of Holy Trinity in Glen Burnie, enjoyed traversing through the city as he grew in his relationship with God.
“It’s going to help me get closer to God, praying and seeing other Christians,” Okanga said.
The journey took the pilgrims through the campus of Loyola University Maryland to Notre Dame of Maryland University, both in Baltimore, for a concert by singer ValLimar Jansen from Los Angeles. As the group left Notre Dame, they received palm branches which they carried with them to the Cathedral of Mary Our Queen in Homeland.
Julia Amoriello, 15, a parishioner of St. Mark in Fallston, carried the cross from Notre Dame to the cathedral.
“It’s very heavy. It doesn’t really compare to what Jesus did for all of us,” said Amoriello, who was beaming. “I love to be around so many faithful youth. It makes me love my faith more.”
The group attended the vigil Mass of the Passion of the Lord at the cathedral during the parish’s 5 p.m. liturgy, which began on the church’s front lawn.
In his homily, Archbishop Lori said to the faithful who packed the cathedral “all day long we have been walking by faith and in life our pilgrimage has led us to this Cathedral of Mary Our Queen where we have listened to the story of the Lord’s suffering and death.”
He continued, “We help Jesus carry his cross when we pick up our crosses every day and carry them, those things in our lives we would like to change most but can’t, those things that make us unhappy, accepting that cross and bearing it willingly is how we help Christ carry his cross.
Read last year’s article on the youth and young adult pilgrimage. For video, click here.
Also see: At the beach, archdiocesan young people strengthen their faith
Copyright (c) March 24, 2013 CatholicReview.org
PrevNext