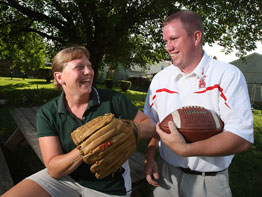 Married seven years in August, Rob and Kari McBride have created a life surrounded by sports and two beautiful children.

Rob, a full-time strength and conditioning coach at Archbishop Spalding High School, Severn, and Kari, a full-time athletic director at The Catholic High School of Baltimore, have learned how to effectively and efficiently juggle their demanding schedules while fostering a dynamic family life.

“We have a lot of family help and support,” said Mrs. McBride.

Once the academic year kicks back into gear, the family carpool will pull out at 6:45 a.m. and head to grandma’s house. From there, the two young McBride children, Riley, 4, and Ally, 2, will head home at 3:30 p.m. to be watched by a neighbor until Rob or Kari return home, 12 hours from when their day started.

“We have the energy to make this work, but some days are just crazy,” Mrs. McBride said. “Sometimes I cannot believe all that I have accomplished in a two-hour span of time.”

Despite long nights at school, “home game” responsibilities at Catholic High and late evenings at Spalding, both parents remain committed to spending quality time, every evening, with their two children.

“It’s all about them right now, and we want to spend as much time with them as we can,” said Mrs. McBride, as Riley and Ally ran around her chair for a hug in their Anne Arundel County home July 17.

Rob and Kari met at what is now McDaniel College. Both were majoring in physical education. Both played sports at the Division III level, as Rob quarterbacked the football team and Kari played soccer and softball.

They are both competitive to a certain degree, but they value the love of the game and the relationships built over the competitive nature of sports.

The McBrides play on a co-ed softball team through the Baltimore Sports Social Club. Rob, 30, continues to play football each Sunday.

Their backyard serves as a sports haven, with frisbees, t-ball, footballs and various other sports equipment.

A love of sports runs in the family. Riley, a preschooler, played soccer and t-ball this year and looks to enroll in a flag football program. Coached by his father growing up, Mr. McBride now coaches his son, and loves the bond that connection forms.

Both Mr. and Mrs. McBride agree that they want sports to be a part of their children’s lives, but for all the right reasons. In fact, they have seen the over-involved parents on the sidelines.

“Believe me, we’ve seen it all,” said Mr. McBride. “We just want to be the kind of parents that stand away from the crowd, on a hill somewhere, and watch our kids.”

Working such long hours is often difficult for Mrs. McBride, who feels that, at times, she misses out on Riley and Ally’s daily activities. “Sometimes I feel like I am getting information second-hand about school and it’s really hard.”

Both Rob and Kari attended Catholic schools and look forward to their children continuing in that path.

“We attend St. Philip Neri Church as often as we can with the kids,” said Mrs. McBride. “We say our prayers with our children every night, and we look forward to sending our children to Catholic elementary and high schools.”

Rob and Kari McBride embrace their hectic schedules and truly love their life.

“I love my family, my two kids, and I want Kari and I to raise them the way we were raised,” Mr. McBride said.

Mrs. McBride chimed in, saying, “We love what we do, and we make it work. We take things day by day and that works best for us.”