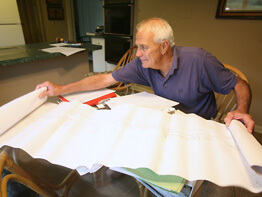 When Theresa Dowdall opened a Christmas gift given to her by her father a few years ago she received more than a material offering. The mother of three had in her possession an annotated sampling of her family’s past.

The book was a small portion of the vast research St. Joseph, Cockeysville, parishioner Charlie Grafton has compiled on his family, with information dating back to the 1600s and chronicling his ancestors’ conversion to both city living and Catholicism.

From the time the 74-year-old Phoenix resident was a boy growing up in Baltimore, he loved hearing stories from his father and grandfather about the interesting characters who adorned his family tree.

“I worked in my grandfather’s store when I was a boy and he would tell me these stories about the different members of the family,” Mr. Grafton said. “He would also talk about what it was like when he was young. I couldn’t wait to hear more of these stories.”

His passion for family stories never waned and by the time he was a 35-year-old father of three, the then telephone company executive began writing down his relatives’ tales. However, the real work didn’t begin until about two years after he retired from AT&T in 1989.

With a little more free time on his hands, Mr. Grafton began poring over old newspaper articles, obituaries, land records, cemetery accounts, census reports, church documents, shipping lists and he even joined the Historical Society of Harford County for greater access to the organization’s wealth of information.
“Each piece of family history is like a detective story,” he said. “When you dig to verify the information someone has given you, you usually end up with even more questions. But, you also come up with some surprises. It’s like finding hidden treasure.”

One of the riches he unearthed was a 1725 land transaction in Harford County involving property owned by William Grafton, Charlie Grafton’s earliest known ancestor.

“This was a great find,” he said of the man who was presumably born in England in 1685, immigrated to Colonial America sometime after that and died in what is now Harford County in 1767. “I didn’t know when he came here, but with this document, we know for certain he was here sometime before 1725.”
In a scroll of paper that stretches 10-feet-long is a chart of Mr. Grafton’s family tree, with last names that include Denton, Monette, Bayne and Carroll.
During his research, Mr. Grafton did discover that his family’s conversion to Catholicism happened during the 1800s with the marriage of a Bavarian ancestor, and he was able to answer why the Graftons traded farm life in Harford County in the last part of the 19th century for urban living in Baltimore City.

By going through newspaper articles and family accounts, he was able to piece together that his great grandmother, Elizabeth Agnes Grafton, was in a carriage accident that left her with paralysis, making farm life difficult.

“So, I believe that is why my great-grandfather (Ralph Lee Grafton) moved the family to Baltimore City and opened a butcher’s shop,” Mr. Grafton said.
For Theresa Dowdall and husband Jamie, the book her father gave them has become a family document they will continue to treasure and pass down to their children.

“It gave us great insight into our family heritage,” she said.

For the future of his research, Mr. Grafton hopes one of his seven grandchildren will catch the family tree bug.