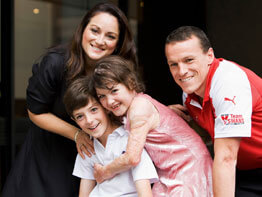 PERTH, Australia – The Catholic family of an 8-year-old girl who narrowly escaped death twice was named among nine ambassadors for World Youth Day 2008.

Sophie Delezio, known to Australians as “Little Sophie,” was thrown more than 55 yards when she was struck by a car two years ago. She spent 12 days in intensive care after suffering a heart attack, a broken jaw and broken shoulder bone, bruising to her head, numerous rib fractures and a tear to her left lung.

In 2003 she lost both feet and suffered burns to 85 percent of her body after a car crashed into a Sydney child care center she was attending.

The Delezio family – Sophie’s parents, Ron and Carolyn, along with Sophie and her brother, Mitchell – are among the local sport stars, singer, diplomat and fashion designer chosen to promote World Youth Day among Australians.

Sophie’s parents said the opportunity to serve as World Youth Day ambassadors provides them the chance to give “back to the church for what it has given us.”

“World Youth Day will show Australians that the pope seriously cares about the people in Australia and wants to be with his family here,” they said in a statement released by World Youth Day organizers.

Sophie, who was baptized at the shrine of Blessed Mary MacKillop in Sydney, always went into surgery with a prayer card and a relic of Blessed MacKillop, the Australian founder of the Sisters of St. Joseph of the Sacred Heart.

Blessed MacKillop, who was beatified by Pope John Paul II in 1995, is one of 10 patrons of World Youth Day.

“When the medical side is out of your hands, the only other way we could help Sophie was in prayer and knowing that there was a possibility of Sophie going to God if it did not work out,” Sophie’s parents said.

“No one can endure the difficulties of dealing with their child’s critical injuries without having faith,” they added. “It would have been too hard without believing in God and Mary MacKillop.”

The couple said they witnessed God’s love when they saw the World Youth Day cross and icon arrive in Australia. When they saw their children touch the cross they felt “God’s energy was passed on to the children and our whole family.”

Australian Cardinal George Pell of Sydney described the ambassadors as “impressive Australian role models” who will help encourage “all Australians – young and old – to get involved in World Youth Day.”