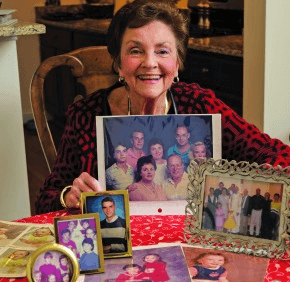 By Erik Zygmont
ezygmont@CatholicReview.org
MILLERSVILLE – Bishop Adam J. Parker was 10 years old when he made his first decision to serve the church.
“He said, ‘I’d really like to be an altar server,’ ” said his mother, Maureen Parker, recalling her youngest child’s pronouncement, delivered during the drive home from Mass at Our Lady of the Fields. “In the next breath, he said, ‘I think if I have something to do, it will make Mass go faster.’ ”
As she looked forward to a lengthy episcopal ordination Mass Jan. 19 at the Cathedral of Mary Our Queen in Homeland, Parker said she was filled with joy for her son.
“I had been told a number of times over the years that he would probably be a bishop, but I never knew what to say,” she said.

Cradle Catholics both, she and her husband, George Parker, who died in 2012, gave their five children – in order, Michael Parker, Sue Parker, Paul Parker, Mollie Figueroa and Adam Parker – a solid Christian upbringing, taking them to church for Sunday Mass, holy days of obligation and the Easter triduum, as well as to the sacrament of reconciliation.
“At breakfast after Mass, George would quiz our kids on the homily,” Maureen Parker said, adding that all her children, who attended mostly public schools, were in religious education through high school.
Bishop Parker helped spread the Gospel early. Born in Cleveland, he was baptized at St. Felicitas on a weekday, so that Sue and the other second-graders at its parish school could observe the sacrament while preparing for first Communion.

As a young child, he enjoyed putting on plays, complete with tickets, and creating a neighborhood haunted house in the basement of the family home for Halloween, his mother remembered.
His sister, Mollie, a nurse at Anne Arundel Medical Center, said he has always displayed strong leadership abilities.
“Even though he is my younger brother, he was almost like an older brother, because he was always looking out for me,” she said. “If I got stuck, he was there to help me down from trees.”
That doesn’t mean, Mollie added, her brother wasn’t “an instigator.”
“He pulled the cat’s tail behind the couch when he was three or four, and the cat bit me in the face,” she recalled.
The two were constant companions.

“Our parents would kick us out of the house in the morning and tell us we couldn’t come back until 6 p.m.,” Mollie said.
Bike trails were their frequent destination, a foreshadowing of Bishop Parker’s continuing love for the outdoors, which he indulges with hiking trips when his schedule allows. It’s an affinity reflected in mountains on his episcopal coat of arms.
When he left home for Virginia Polytechnic Institute and State University in the fall of 1990 (he would transfer to the University of Maryland the following year), Mollie left him a sizeable bag of chocolates.
“I did it because, one, he’s a choco-holic, and also to give him a note about how much I’d miss him,” she said.
She was touched when he later pulled it out during his commencement address in College Park.
Paul said his younger brother was “a good guy growing up, very early on.”

“He was very easy to live with and very caring of everybody else in the family,” Paul said, adding he wasn’t at all surprised when Bishop Parker entered formation for the priesthood.
“It was rather obvious to myself and some of my brothers and sisters from a very early age that he would become a priest,” Parker added, the key word being “some.”
“Him becoming a priest was probably the farthest thing from my mind,” said Michael, the  eldest sibling.
“I was nine years older than him, and he was the baby in the family. He always seemed to get his way, all the time – that’s basically my memory of Adam, growing up,” he added, the older-brother gruffness to his voice now largely overwhelmed by playfulness.
“Since he started studying to become a priest, and grew up, we began to get along very well,” he said.
The ordination Mass was not an entirely unfamiliar scene to the Parker siblings.
“When he started being an altar server, he would get upset with us, because we would try to make him laugh,” Mollie said. “Now he knows not to look at me when something funny happens, or he’ll laugh.”