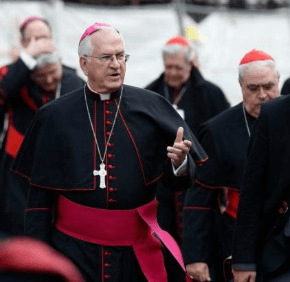 By Cindy Wooden
Catholic News Service
VATICAN CITY – The family is not just an object of church discussion, but must be a subject — an actor — that shares its life and witness with the wider Christian community, said Archbishop Joseph E. Kurtz of Louisville, Kentucky.
At the Synod of Bishops on the family, he said, members agree that “the family is also meant to be an agent and instrument of mercy,” promoting healing and reconciliation among their members and in reaching out to others, both their neighbors and strangers.
Archbishop Kurtz, president of the U.S. Conference of Catholic Bishops, said he would return home from the synod with a commitment to finding new ways to “call forth families” and to give them the formation they need to continue to strengthen their relationships at home and with others.
The archbishop, who for years worked for Catholic Charities with a wide variety of families in difficult situations, said the ministry of the church begins with “presence. We need to look at the way we speak, but we know the best priests, the best pastoral ministers are the ones who know how to be present with others.”
The Catholic Church must be careful and precise with his doctrinal language, he said, but members of the synod also seem to agree that it would benefit from a greater use of biblical language, which often is more accessible than the philosophical sounding words of church doctrine.
In the United States, he said, people may find it difficult, for example, to understand the church’s use of the phrase “intrinsically disordered” to describe same-sex attraction. It is “a philosophical description of what it means for love to be oriented in a certain way in God’s plan for marriage and for openness to children,” the archbishop said.
At the same time, he said, the Catechism of the Catholic Church also speaks of human dignity, respect and the fact that every person is a child of God. Archbishop Kurtz said, “Those are not things we have to make up; they are already part of our teaching.”
The use of language requires care, he said. “It is one thing to proclaim; it is another thing to see how something is received.”
“The church is a family of families,” and like in any family it is important to listen to each other and understand what they are hearing from you, the archbishop said. “Our task — it’s a lovely task — is to proclaim the message of Jesus Christ, so we’re not making up the truth as we go along.”
But the church throughout the ages has evaluated the best ways to communicate that truth and that is something that the synod is trying to do now.
“We learn by being present to one another and together seeking to live the truth, love and mercy of Christ,” he said.
Copyright ©2015 Catholic News Service / U.S. Conference of Catholic Bishops.
See also:
Synod calls for Bible-based presentation of God’s plan for family